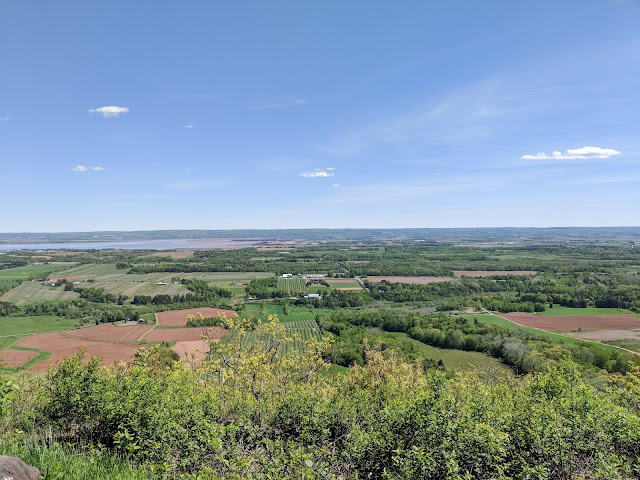 As I sit down to write this post, a post that I've been waiting to write for months now, I'm not even sure where to begin. I suppose I should start with how the idea to uproot our family, leave the house of our dreams and move to the East Coast came to be even a consideration.

It all started with a little house and storefront in New Brunswick, at the entrance to the bridge to Prince Edward Island. A customer had told my dad about this little piece of property for sale on the East Coast - a beautiful Victorian home, as well as a storefront complete with a five room motel off the back, all for $59,000! At first it was a joke. There was absolutely no way Ryan would even consider moving, and to be honest, as much as I was open to it being a small possibility, I couldn't consider moving away from my family.

But as a couple months went by, the property became a conversation between Ryan and I over and over. That conversation turned into hours and hours spent on realtor sites. The more time we spent searching through properties, the harder it was to laugh it off as day dreaming. There was something about the idea of being mortgage free and having space for our boys to grow up that kept nagging at us. There's always been something about the East Coast for us. And before we knew it, we had booked flights to go out and really just to get a feel for it out there, and to see how we liked it.

We concentrated our searching on Prince Edward Island and Nova Scotia. Once we were out there, we drove around, trying to get a feel for the different areas. The first area we spent time in was Lunenburg, Nova Scotia - a historic town on the Atlantic full of old homes that felt very much like Maine. The next part of our trip was to be spent on PEI, but literally on our way there, (having already booked showings and accommodations) we both felt strongly that the island was not where we were supposed to be going. So, we decided to head to the opposite side of Nova Scotia, the Annapolis Valley, and spend our last night there. That night we drove into Wolfville, and immediately liked the feel of the old university town. The next morning, we decided to go for a drive.

As soon as we left town and made our way through the back roads and into the Grand Pre area, we felt at home. The landscape, with it's rolling hills and orchards and old farms and vineyards was so like the most beautiful parts of the Niagara Region where we live now. The only differences were instead of an escarpment, they have a North and South mountain, and instead of Lake Ontario, they have the Bay of Fundy. You can see a view of the upper part of the Valley in the first photo. It's taken from the Lookoff on the North Mountain. While there, my husband made a last minute decision to pop into a car dealership to get a feel for how stores are run out there. Little did we know, that little chat would lead to a great job opportunity for him right there in the valley.

We toured dozens of homes over the next couple months. We nearly purchased two homes prior to this one, but both times, unexpectedly, those doors closed. The sale of our home was much harder than we anticipated. I got it ready for over 60 showings. In the middle of it, we decided to do a massive renovation and re-insulate the attic of the old part of our home, we had multiple offers fall through on account of buyers not able to get financing and honestly, the whole season stretched my faith more than anything else so far. I kept a prayer journal throughout it and I'm so thankful I did. In the midst of it, it felt like a roller coaster, one that at times, I wanted to get off of. But in the end (now that we can see everything in hindsight), we're so thankful that God worked out this crazy plan in the exact way that He did. In the end, missing out on the other houses, and having to go through the disappointment of each offer falling, through lead us to a house so much more perfect than we could have ever imagined. He even took care of a major fear of mine - not being able to have the surgery I needed before we left.

And now our house is sold. (To a lady who appreciated the character of an old home and shared a love of Hydrangeas, no less.) We move at the end of November. Originally, our goal was to be out there for September, but rarely does life ever go according to our plans. And thank goodness too, because His plan is so much better. In the end, we fell in love with the most lovely old farmhouse with weathered shakes and a tree-lined drive in the country. It was a bank foreclosure and priced to move quickly, so completely contrary to our original plan, we purchased a home before our house was sold. In the end, the day we signed off on the papers to officially sell our home here, we got the keys to our new house - not a coincidence. The extra time has been so necessary with the new house because in being a foreclosure, and very old, there's a lot we need to do to it before we move in. There's a lot of demo, lots of cosmetic clean up, a few big projects like a new roof and new heat source, and floors to refinish. It won't be completely redone by the time we move in, but the goal is to have all of the major things complete.

So, this house. Want to know something crazy? I've never actually stepped foot into her.

The week before we flew out for our final walk through before closing I was admitted for emergency surgery. I'm recovering well and so thankful to have the surgery done, but it meant I couldn't fly. Ryan will fly out again next week to check on the renovations, and again, I have to stay home. So that means, the first time I see our new house in person, will be the day we drive up the driveway to move in. If I'm honest, that's been a little hard for me. I would have loved to be there for the first walk through. Thankfully Ryan Skyped everything from the moment he saw it from the road so I wouldn't feel like I was missing out on the first reaction. I would have also loved to have seen it all at it's worst, after demo, so that I can really appreciate the transformation when it's done. Thankfully though, we have a general contractor who keeps us updated each day with photos and videos of the progress.

Because I haven't been there in person, I have a limited selection of photos to share with you, but at least I have some! 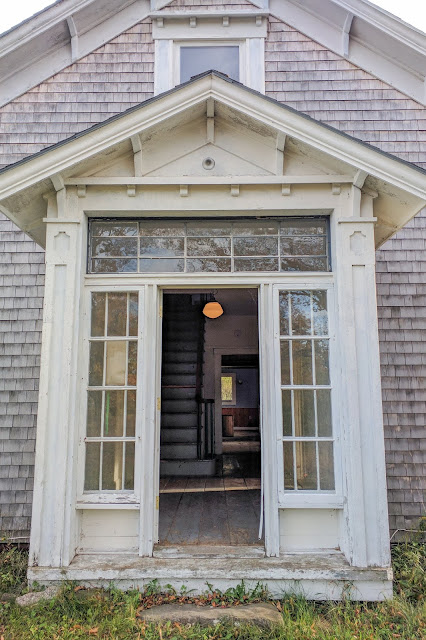 Welcome to our new house. I feel like she was saved just for us. 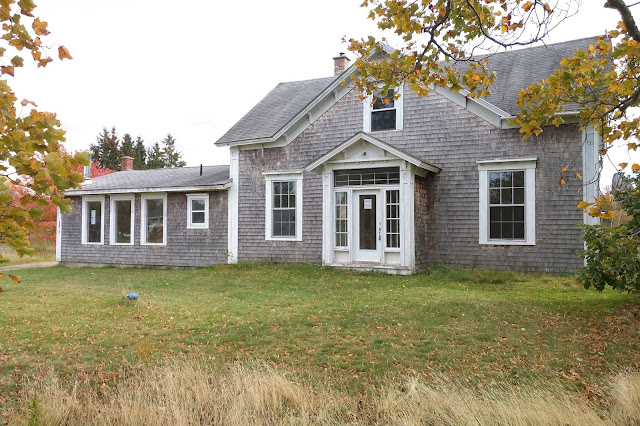 The house sits on four acres. You can see the mountains in the distance and the Annapolis River winds along the back of the property. 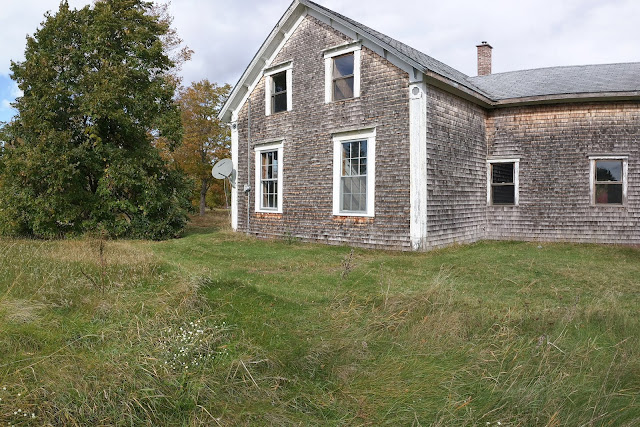 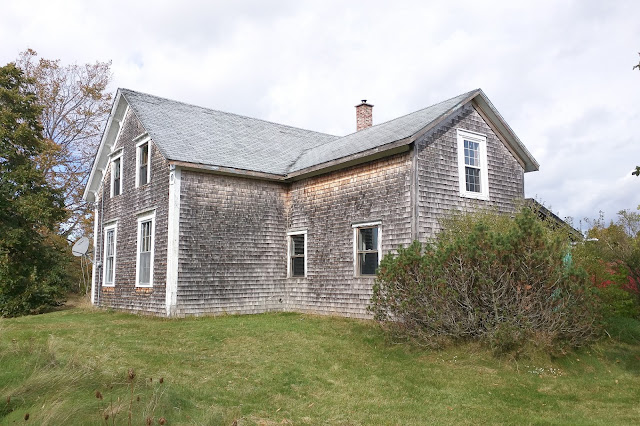 The layout is pretty simple. On the main floor, there are two large principal rooms, one on either side of a large entrance. In the back is the kitchen, with an eat in area, a bath/laundry room and a large butler's pantry. Then to the side, there has been an addition added (with the three tall windows), which is one large great room and bath. Upstairs there are four bedrooms, a main bath and a den. 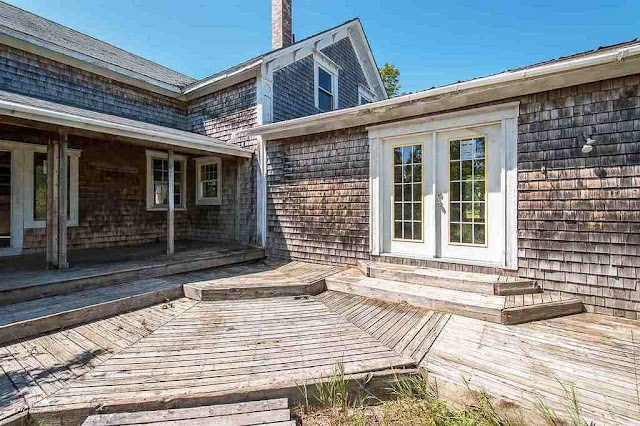 There is a porch off the kitchen on the back, and patio doors that lead from the great room to a deck. All of the lower deck will be removed as it's not structurally sound. 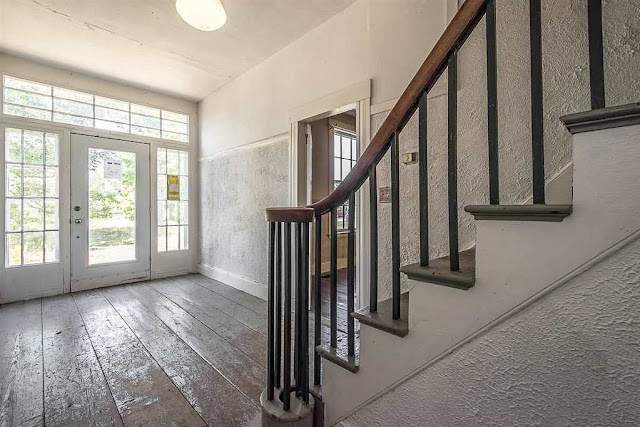 The transom windows and the 12" pine floors and railing make my heart flutter. 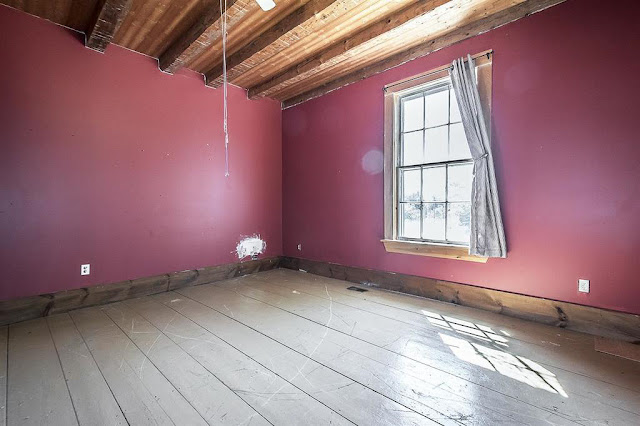 This originally was the formal living room, but we'll be using it as a guest room. There is a large bath on the other side that we'll make into an en suite. 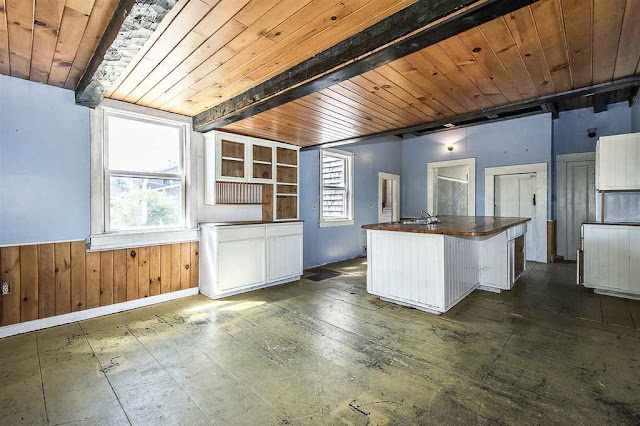 This is the kitchen. Now, the camera hides a lot. For example, see the doorways behind the island? The far left one is to the bath and the one with the light above it is to the front entrance. Notice how short the door on the left is? It's literally 5' tall. We have no idea why... the ceilings are 10 feet tall.

We're going to try salvage the cabinets, but the island (except the top, which we saved), is rotten through the bottom. Most of this room will be completely stripped back. 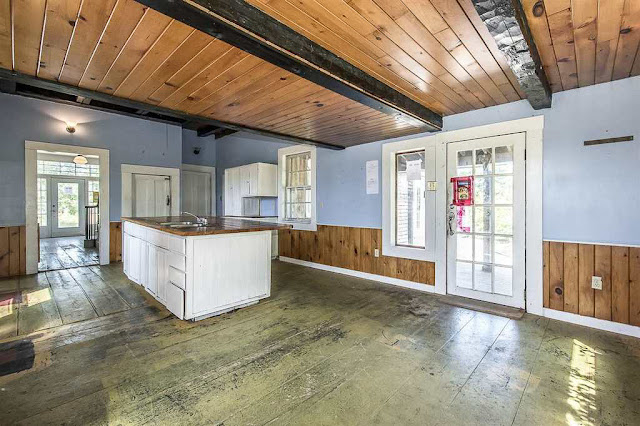 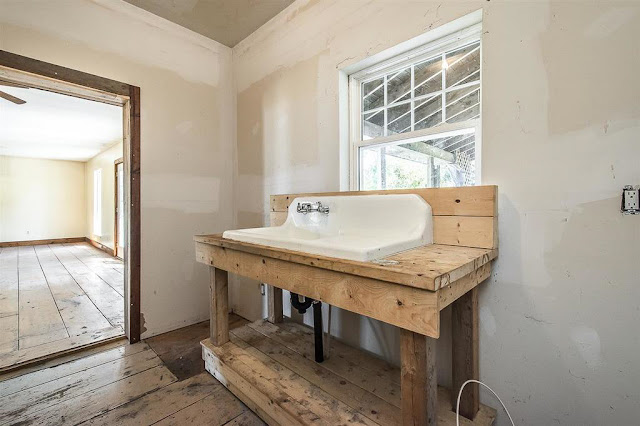 This is the butler's pantry. I have big plans for this space, starting with the salvaged sink, which will be my laundry sink and for a little potting area. The other side will have a floor to ceiling built in pantry and open shelves. 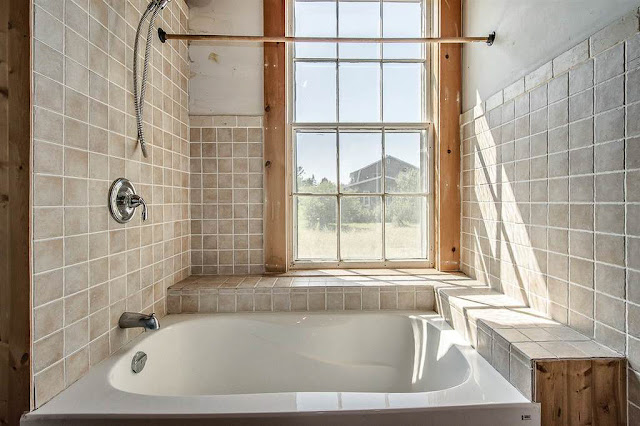 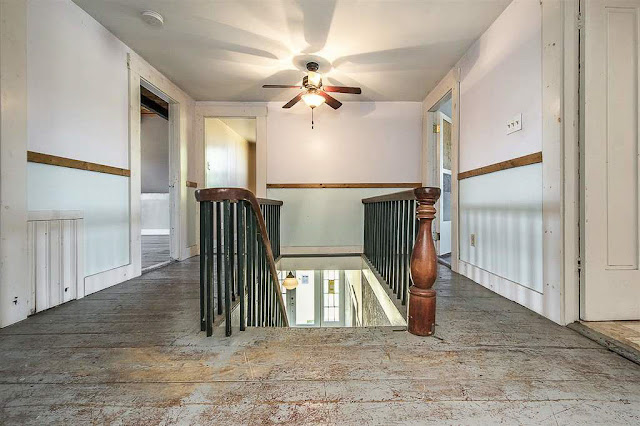 I love the upstairs layout, and especially love the double railings. 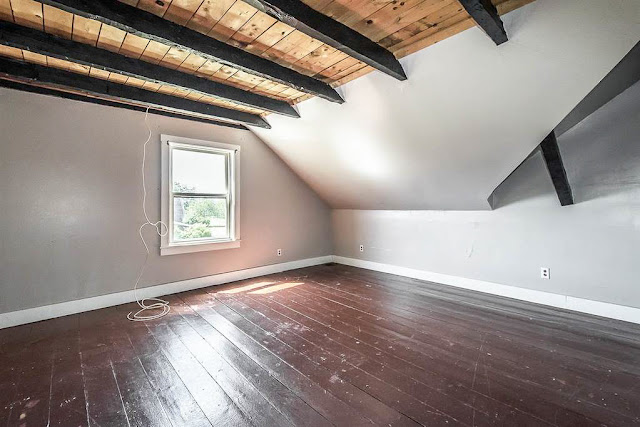 Upstairs is mostly cosmetics and I love how some of the beams have been exposed. 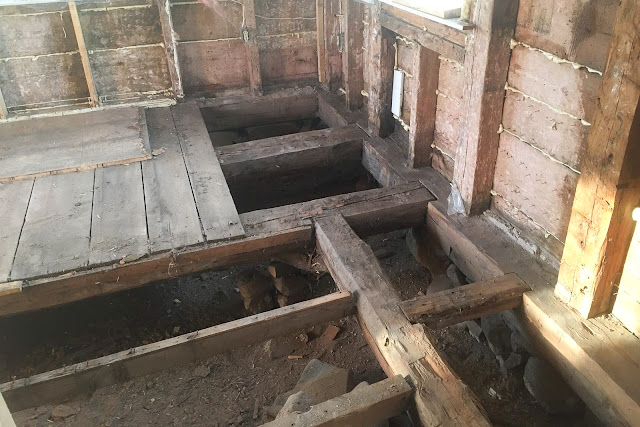 And that brings us to this lovely photo.

This is the current state of my kitchen, completely stripped to it's timber frame. It might look scary, but she's in surprisingly good shape. She needs a lot of love and attention, but her bones are good and her foundation is solid.

I have so many more things to share, but for now, this is enough. I can't wait to take you along.
Posted by the growers daughter at 11:27 PM