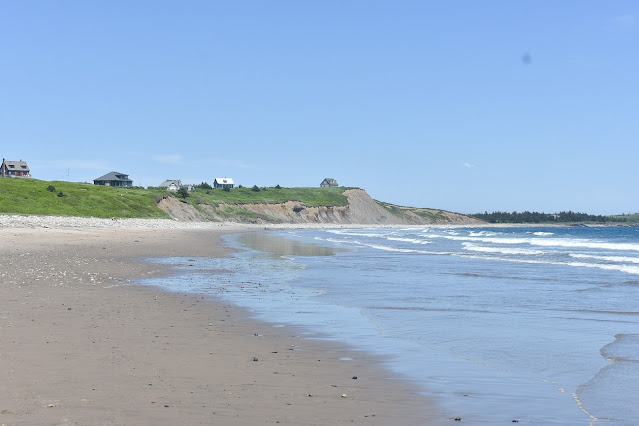 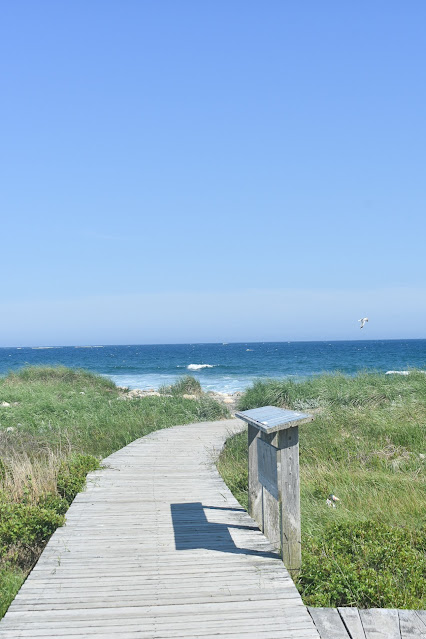 We are a family that loves the water. We are also a family that loves to explore. It isn't surprising then, that nearly every drive we take leads to the ocean. There are so many cozy harbours you pass through as you wind along the shores of the Bay of Fundy. There are so many pleasant towns in the countryside with grand homes and rolling farmlands. And there are so many quaint fishing towns with their weathered huts on stilts, and their rusty lobster traps laying about and their colourful buoys bobbing in the waves. But when given a hot summer afternoon and an empty schedule, we pack our swim suits and books (and a million other things it seems), and we head to the beach. 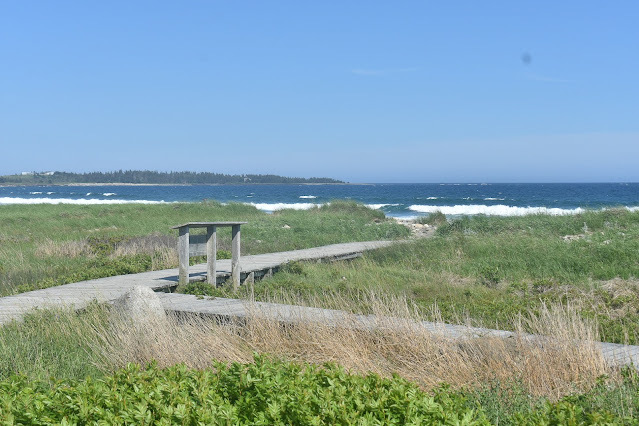 We stumbled on this beach back in March, when my sister and her family were staying with us over spring break. Back when the waves crashed and the wind whipped icy spray as you walked the shore, and your wet face froze and the cold was almost unbearable.

The beach is called Hirtles Beach. It's down past Lower Rose Bay and in the Upper Kingsburg area, south of Lunenburg, Nova Scotia.

Driving down Hirtle Beach Road and Beach Hill Road felt almost surreal. We had no idea an area like this existed here. It was like stumbling onto some road on Long Island, or town on the coast in Massachusetts, but with a decidedly Canadian feel. The cottages that line the hill as you drive in are an unusual blend of historic and modern, something I have yet to discover anywhere else in Nova Scotia (yet). Between centuries old homes sit modern cottages, many designed by world-famous architect Brian Mackay-Lyons. It has such a unique feel to it because though the styles can vary dramatically, there's a sameness to them. In the end, left to salty air and the seaside winds, they all wear the same way. 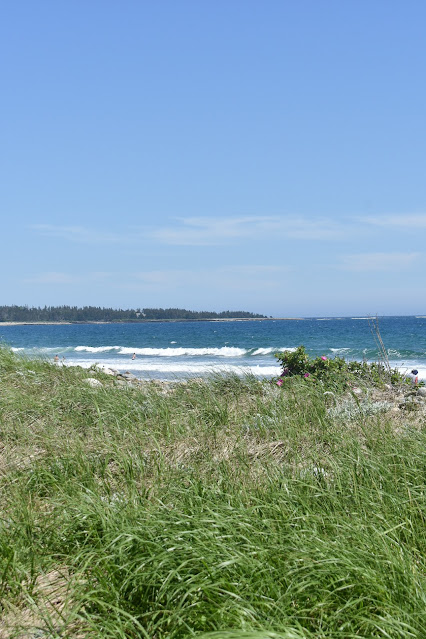 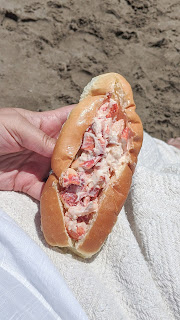 I packed a picnic for us to bring - as many snacks as are required to occupy four growing boys for the period of an afternoon. And for Ryan and I, we stopped in a nearby town, at a farm stand no less, to pick up two giant lobster rolls that the locals here have been raving about. 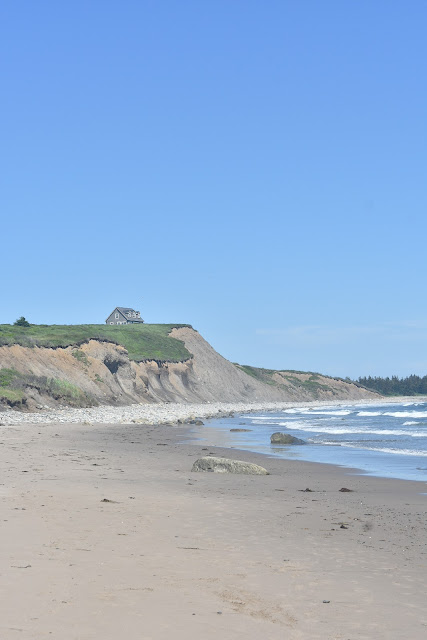 This cottage, perched on the top of the cliff, is obviously a favourite. 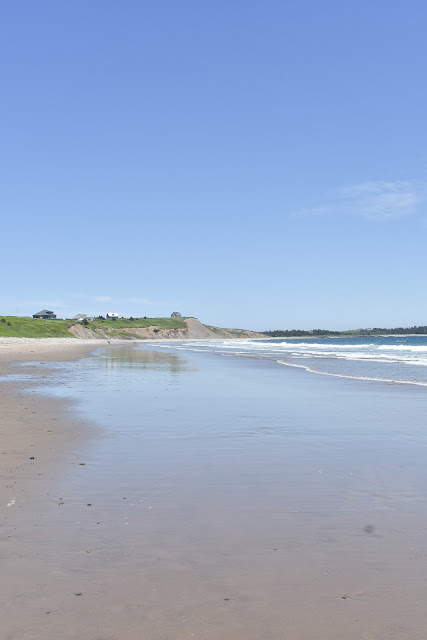 The beach itself is amazing. The waves were so much fun for the older boys, and while it's a bit rocky at the top, there's plenty of sand when the tide is out, and beautiful surroundings. It was windy, and the water was cold, but it's also the beginning of July. 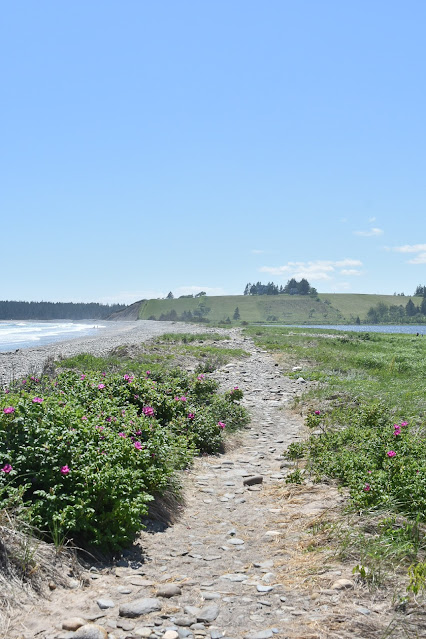 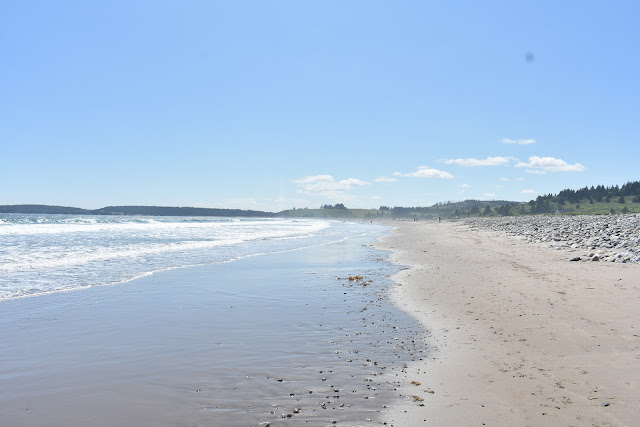 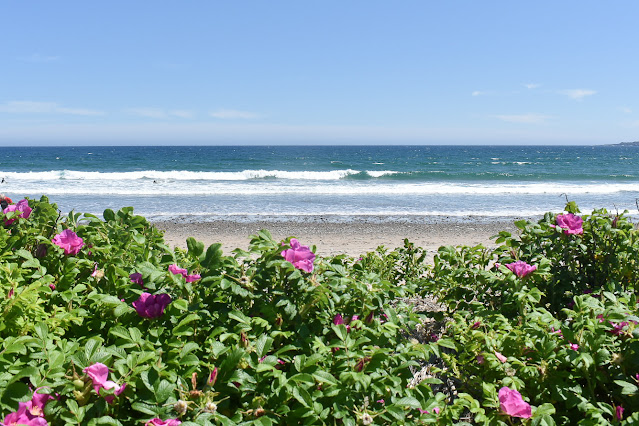 The air is salty and the blooming beach roses add a sweetness. It's such an intoxicating smell, one that's found in some of my favourite places, and always brings with it a wave of the sweetest memories. 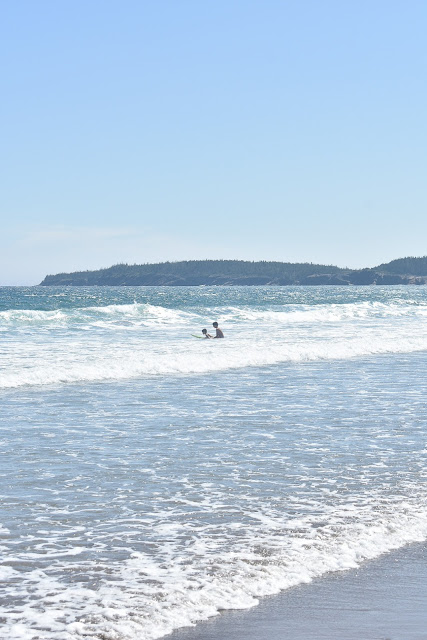 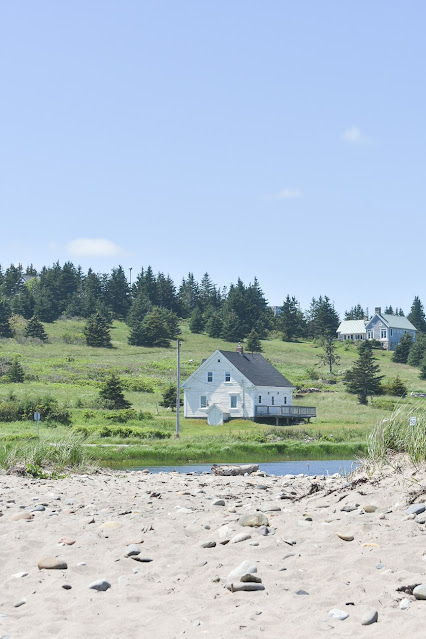 Something that makes this particular spot so great, is that while the ocean is cold and wavy, there are a couple of ponds just steps away, on the other side of the beach. These are warm and feel Caribbean-like, especially after being in the Atlantic. They were perfect for the little ones to swim in. It's also slightly more sheltered from the wind. 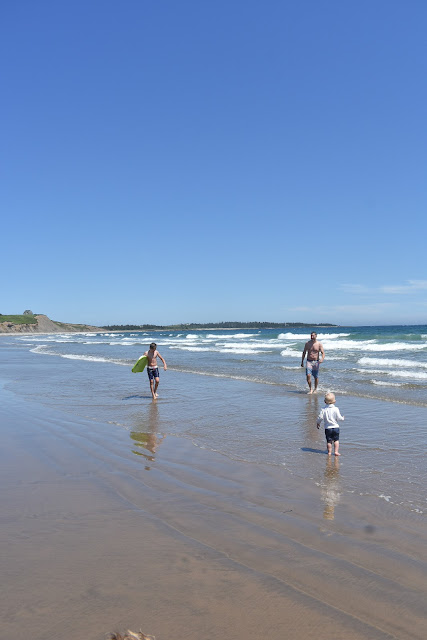 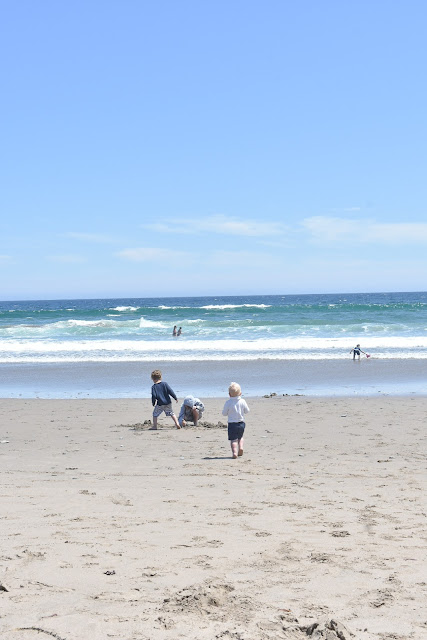 It was hours of fun body-surfing, combing the beach for shells, and chasing the tide. The water is cool, and with the wind, I'm thankful we threw in blankets in sweaters. I love being by the water on a warm day, but I think I especially love it when it's cool enough to sit with a blanket around your sundress, or to throw a cable knit sweater over your t-shirt and shorts. 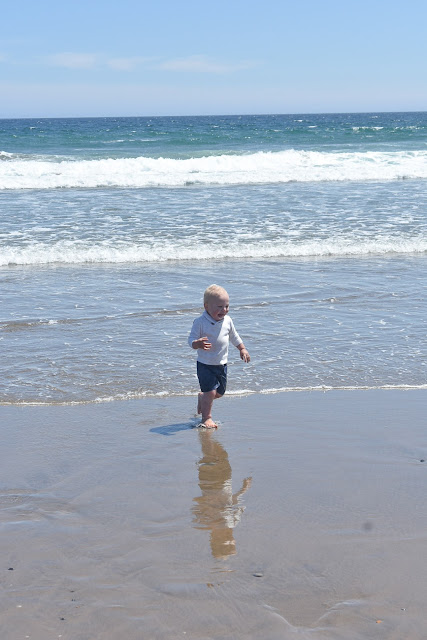 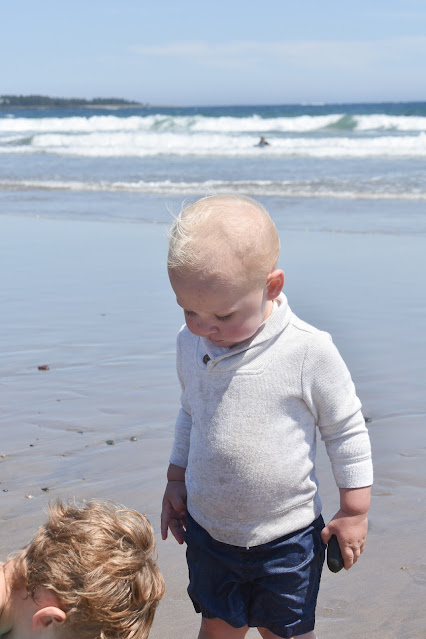 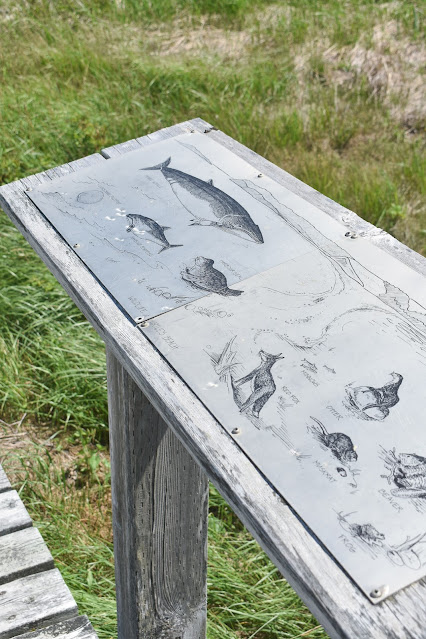 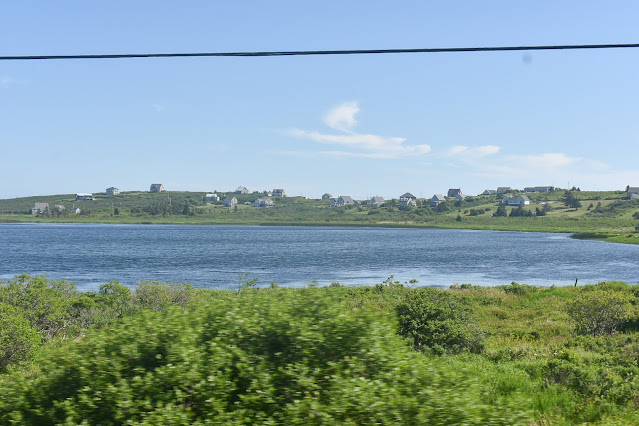 As you drive down the back roads, the roads follow ponds with the ocean in the distance, and the cottages, randomly scattered, line the hills. 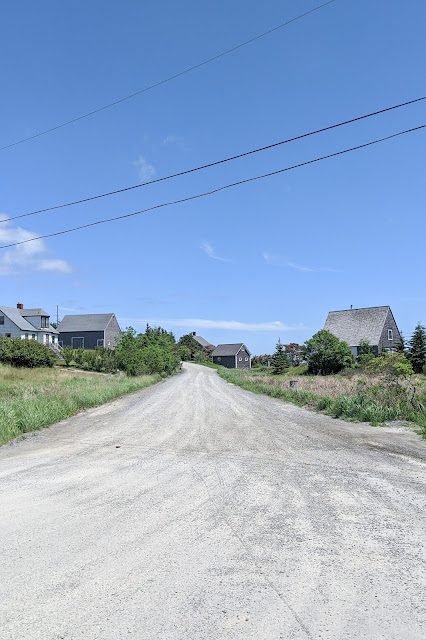 If you follow Beach Hill Road past the turnoff for the beach, there's a small community just a little further down, encircling another pond. Here you can find another little beach area that is part of the Gaff Point Trail. 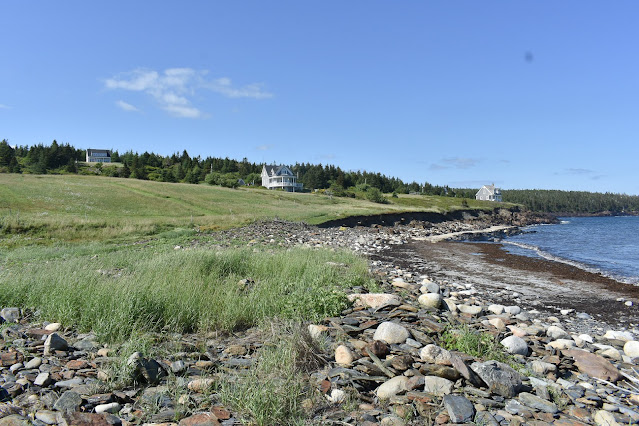 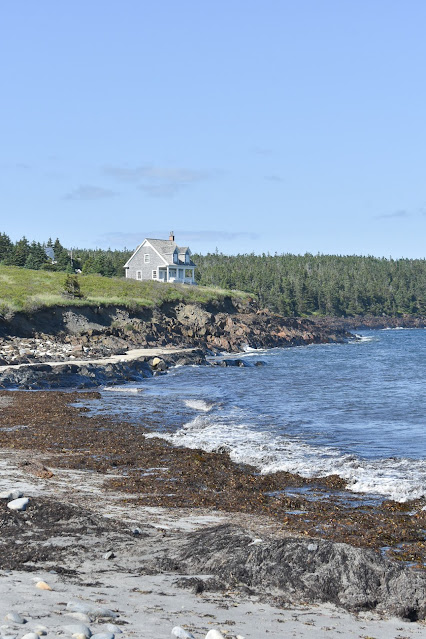 Another favourite cottage overlooking the coast. 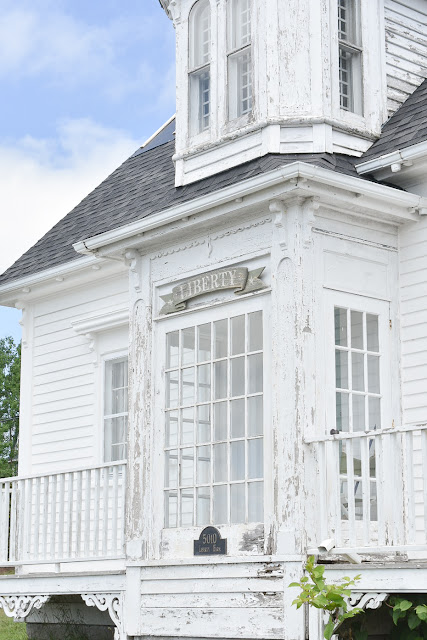 By the time we're thoroughly windswept, skin salty and sand everywhere, we pack up and make our way home. We take the slow, scenic way of course, while the boys sleep quietly, worn out from a day in the sun and waves. 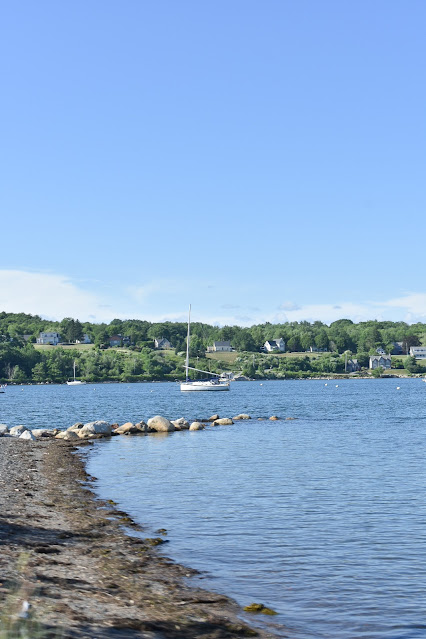 The drive along the Lahave River is beautiful. You wind in and out, following the river, never leaving the edge of the shore. Here the old homes, all scattered along the banks, and church steeples, standing prominently at the furthest points, always remind me of a folk painting. For the first time, we saw all of the sailboats moored in the bays, a sign that summer has arrived on the coast.
Posted by the growers daughter at 9:49 AM