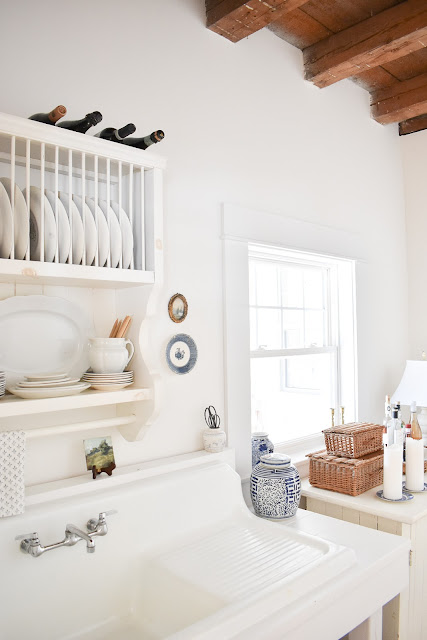 Because in some ways it's an extension of the kitchen, I wanted to also show you the progress I've been making on our butler's pantry.

Having a butler's pantry, as wonderful as the idea would have been to me, was not even slightly a consideration when pursuing possible properties. However, stumbling upon a house that did have one felt like the luckiest of surprises.

For someone who spends a great deal of time in the kitchen and loves to entertain, a space to keep all the items for setting a pretty table, a charming old sink perfect for arranging flowers and lots of space to house pantry items was, well, probably the equivalent to a gorgeous walk in closet. But in my opinion, even better, because I'm constantly passing through it!

Now, before I show you it as it is right now, I feel like you need to see it before... 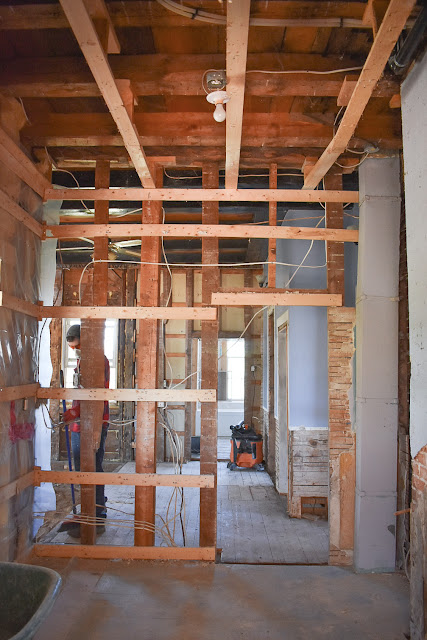 Here it is as of last October, post demolition. The door frame was tiny (just over five feet!), all of the beautiful beams were covered up. There was a great deal of duct work and plumbing running through it and the window needed to be re-supported as it wasn't structurally sound. 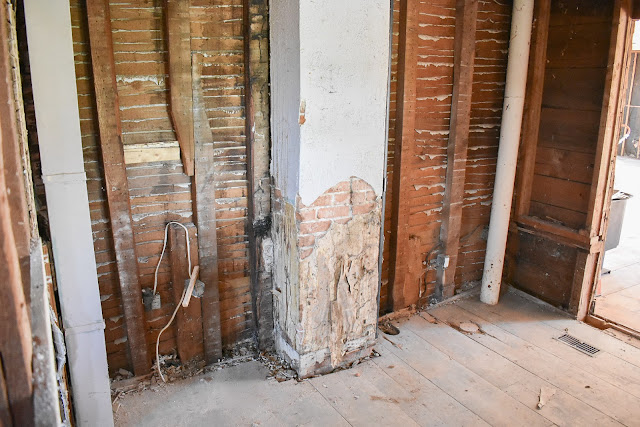 There's always a part of me that's sad I never got a chance to walk through it before, but at the same time, there's also a very tiny part of me that wonders if it's good that I didn't. What a difference. 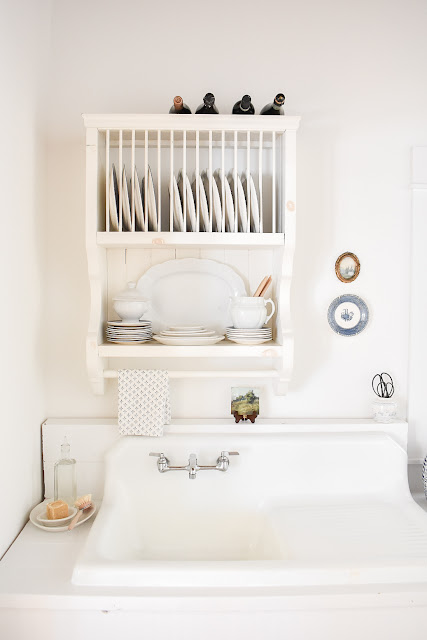 We essentially stripped everything away. Plumbing and venting was all rerouted to be hidden neatly, and the ceiling was left exposed (but cleaned up). We raised the height of the doorway to the kitchen and added the transom to allow extra light into this space. There isn't much natural light as the only window is under our large covered back porch. Wonder of all wonders, one of the only things in the house (which was sitting vacant for a number of months), was this beautiful old cast iron farm sink.

Eventually, the butler's pantry will be finished with custom cabinets. The sink will be mounted slightly more to the left of the window, in an extra deep counter (thought it will still have an open bottom underneath it), with plenty of storage on the right side, right to the kitchen wall. And the opposite wall will have very tall built in cabinets that are on either side of the original chimney.

For now, we tweaked the sink as it was mounted (which meant we saved time and money just using what it was already in), and used an old cabinet I had as a sort of counter top beside it. That cabinet is currently holding all of my pantry type items (canned foods, baking ingredients, dried pasta and legumes etc...) I will add some open shelves on the opposite wall soon as that is where my ironstone collection will be displayed. The dish rack was from my mother in law. She had it in her kitchen for years and I always loved it. At our old home, I didn't have a space on our kitchen walls that it could fit it. I'm so glad that I stored it away though, because it's perfect here. 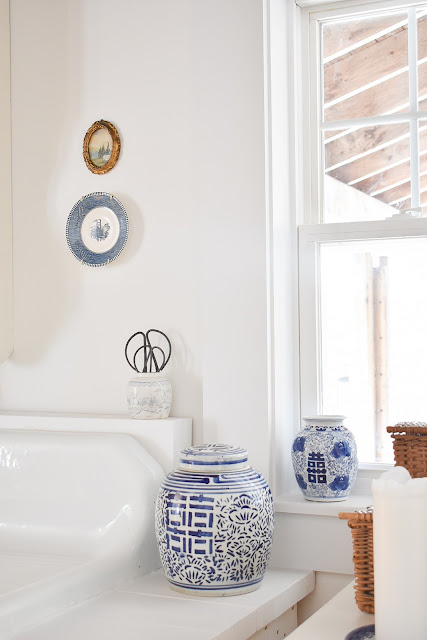 I decided I wanted to display a lot of my blue pieces in this space. It's still clean, and neutral, but I love the traditional feel. I will have a shade made for this window, hopefully in Lee Jofa's Hollyhock print in lemon and aqua (see below) It's probably one of my favourite prints.  I will keep the curtain for the bottom of the sink quite simple though, likely a natural linen, or very plain windowpane pattern, but maybe with some pleats to add a bit of character. 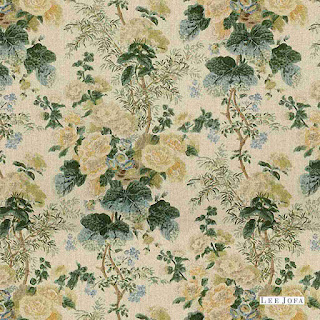 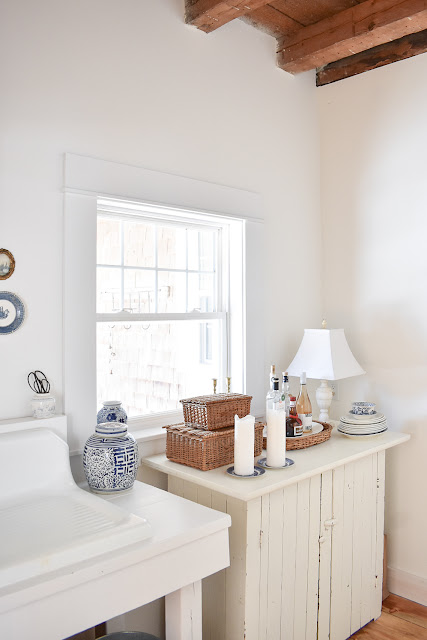 In the spring, when the garden centers open again, I will add some more green in the form of a few pretty topiaries in some of my old terracotta pots. I also have an Audubon print in an old gilt frame to hang as well. I would also like to find an old sconce that holds a candle for on the walls by the door to the kitchen, and I have been waiting for an Etsy shop to return from vacation so I can order the prettiest cord pendant light. 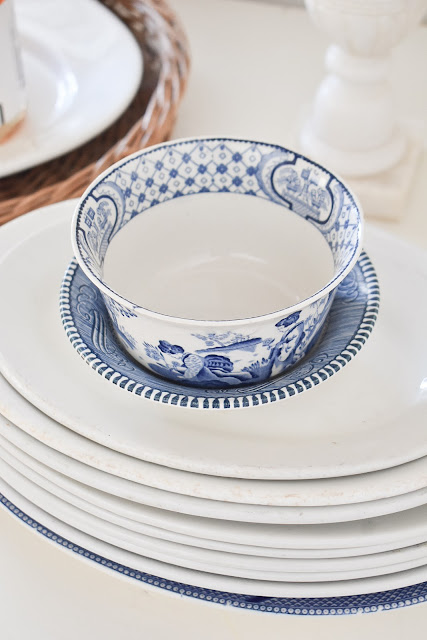 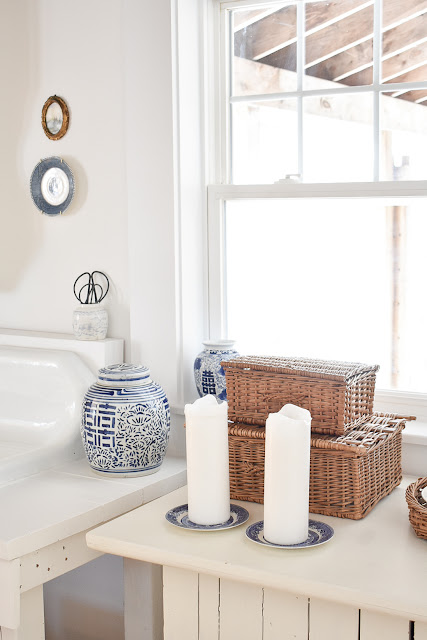 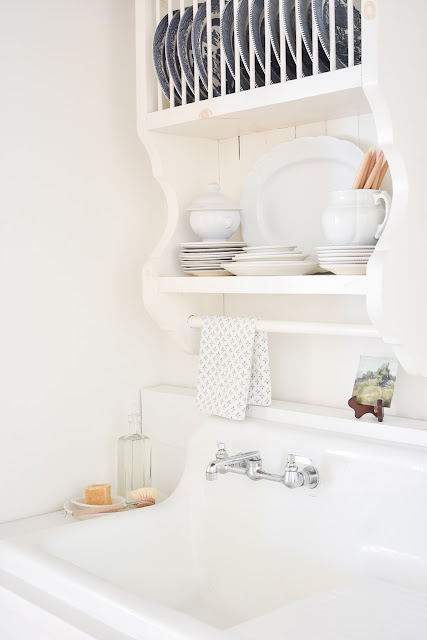 The sink was so helpful while we waited for the stone to be placed on the island, and then the plumbing to be attached. It meant I only needed to wash dishes in a pail for one weekend! 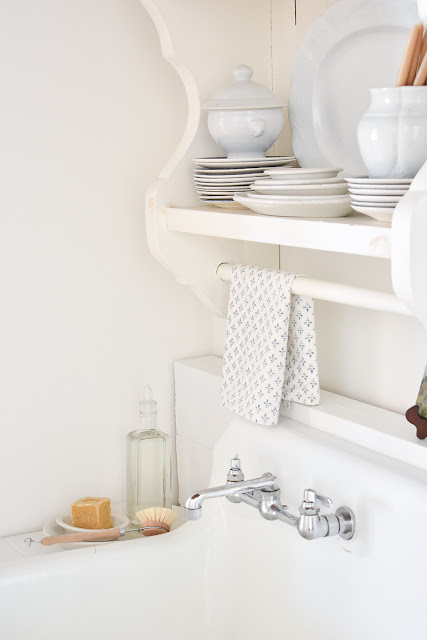 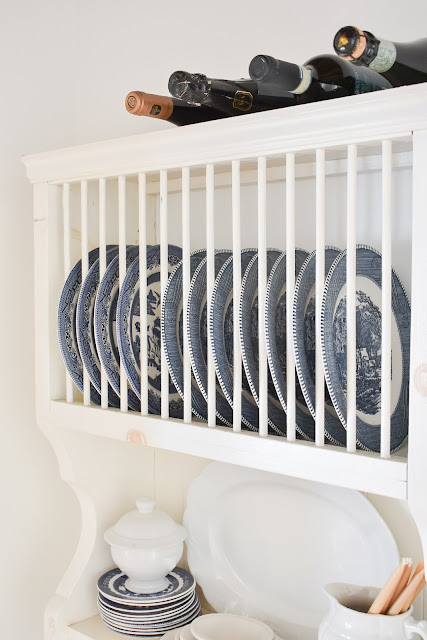 The top of the dish rack made the perfect little impromptu wine rack. 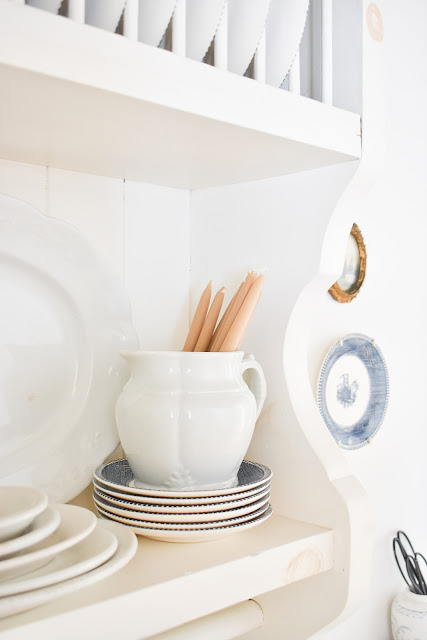 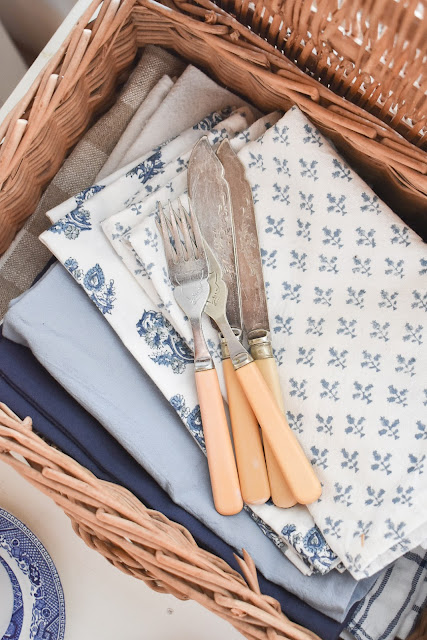 And the baskets are pretty, but also functional as they hold my napkins and a few sets of antique cutlery and napkin rings. 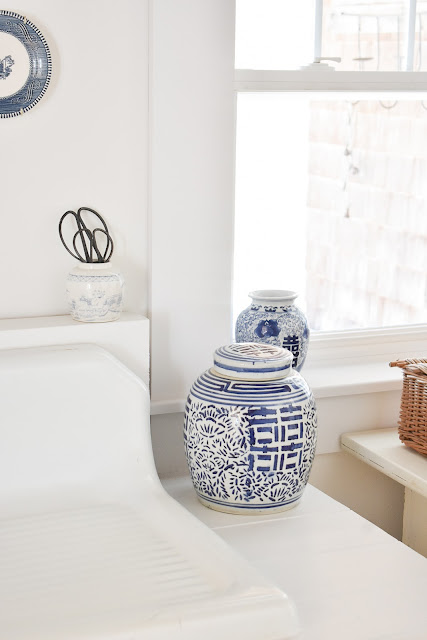 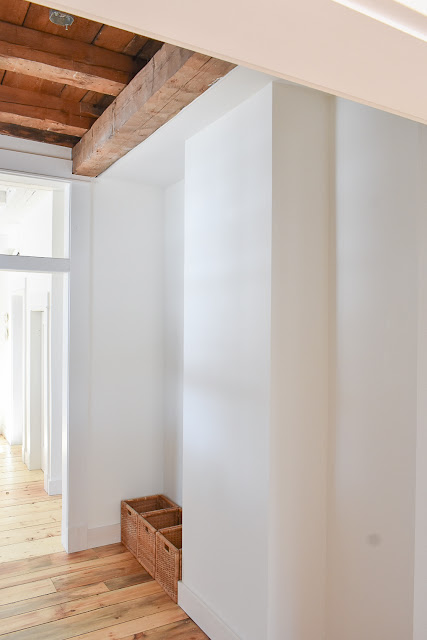 This is the opposite side. As much as I would have loved to expose the chimney brick, it had been covered in something and wasn't pretty, so it was easiest to just cover it all in and keep it clean. The two built ins will be narrow and very tall. One will be shelving on the top (the left side) so I can display my ironstone collection, and the other side will be closed in (to the right of the chimney). Those cabinet will be done in the same style and colour as the island. We absolutely love the exposed ceiling.

For now, three little bins are where I sort my paper and plastic. 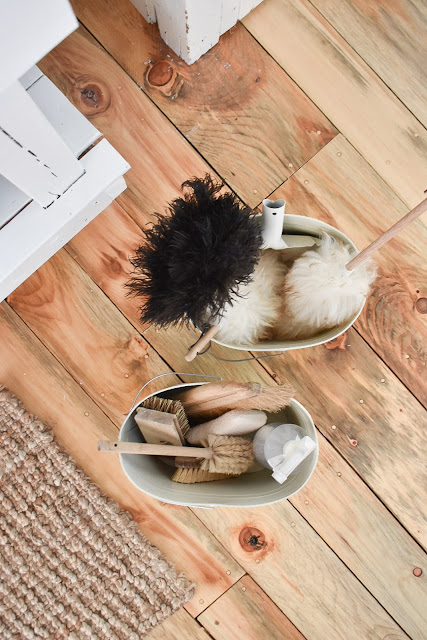 The flooring is also slightly different from the rest of the house. We ran out of flooring and had to go with something kiln dried so we could install it right away. The man who did our floors happened to have this on hand, so we used this. When the cabinetry is in, and the runner is down, it will be a fairly small amount of flooring actually visible, but I do like the warmth of it. 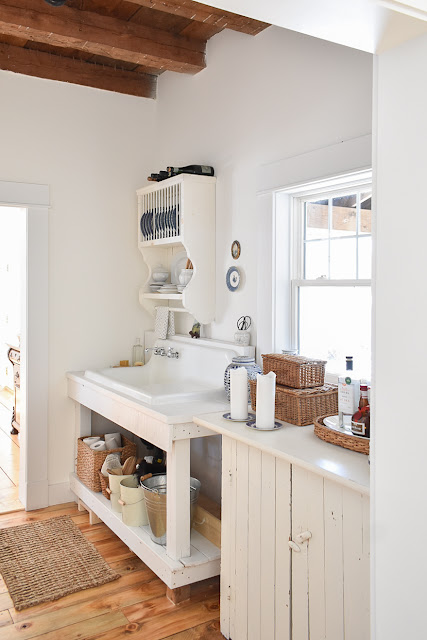 The butler's pantry is between the kitchen (the doorway I'm standing in taking this photo) and the family room (beyond). In the family room we have a small formal dining area, so it's handy having things like my table linens and candles here. 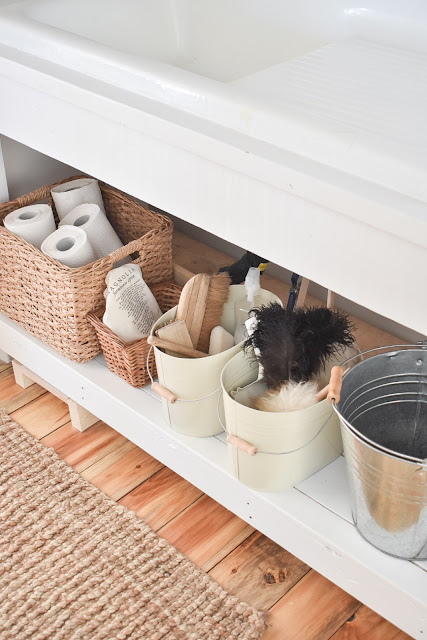 I can't wait to get the curtain hung to cover up the sink, but for now, it's at least pretty to look at.
Posted by the growers daughter at 3:07 PM