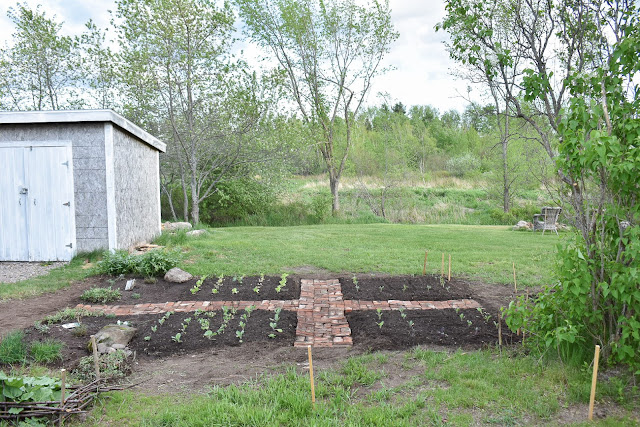 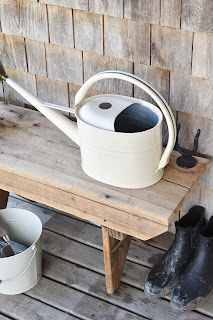 In my always (slightly romanticized) thoughts on what our property will look like, I envision a beautiful kitchen garden with an espaliered fruit tree, long rows of peonies and roses for cutting, a small orchard, an alley of maple trees down our long drive and a sea of hydrangea blooms along the side of our shake house with roses climbing the sides. I have to continually reel in my wandering imagination and set smaller, more attainable goals for myself. There was no way we would be able to afford to carry out all of those projects this spring. So instead, just like the renovations inside our home, I divided my vision into phases. Originally, when I mapped out our kitchen garden, it was actually more than double this size. It extended past the back of the shed, with eight plots instead of four. In the end, much to Ryan's delight, I scaled it down. If it goes well this year, we can always expand it next spring, and continue to build on it. As for the rest of phase one, we planted some hydrangeas at the front entrance, and I purchased my roses to get them established. I will share more on those soon. 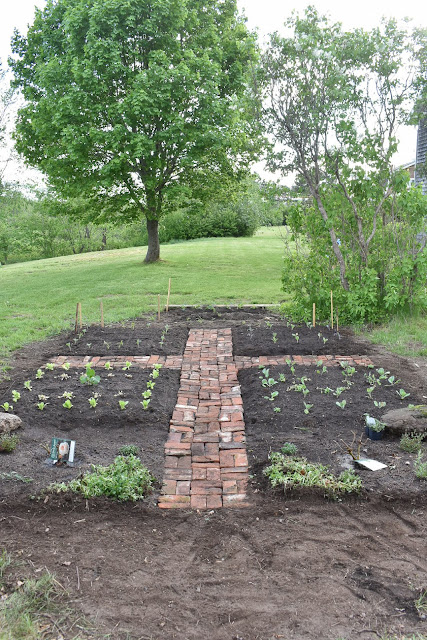 Here is our small kitchen garden - our little potager. (I hear Monty Don say it every time I think of it.)

Now, before I continue, you should probably know that vegetable gardening is very new to us. Most of what we do will be based on what we've read. We will probably make a lot of mistakes. We also didn't have a large budget for this. Essentially, we did the best with what we had.

The garden is divided into four plots of veggies, then two smaller plots at one end for herbs and two rose bushes, and threes small rows at the other end for strawberries and a couple other things I haven't selected yet. 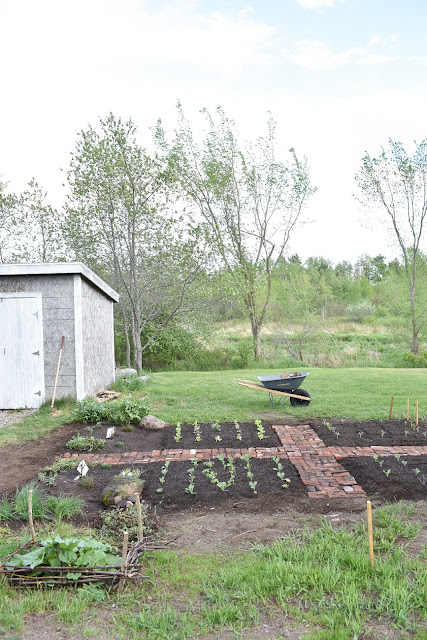 Ryan has been collecting all of the old bricks he's found while cleaning up around the property. I had originally wanted pea gravel walkways (eventually the entire area from the back porch, to the drive, and out to the garden, will be pea gravel. That however isn't something I wanted to invest in right now. When Ryan laid a few bricks to see what it would look like, I loved it. 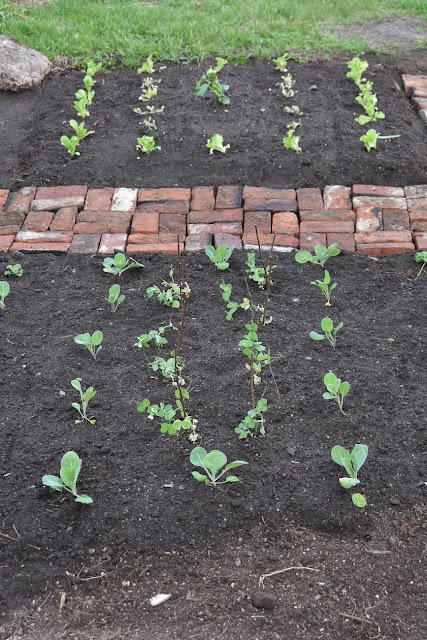 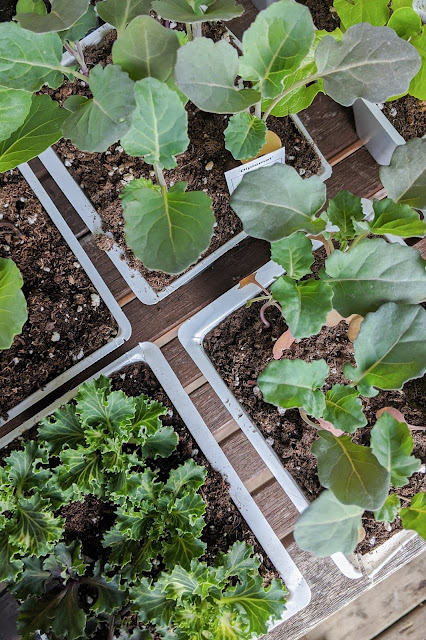 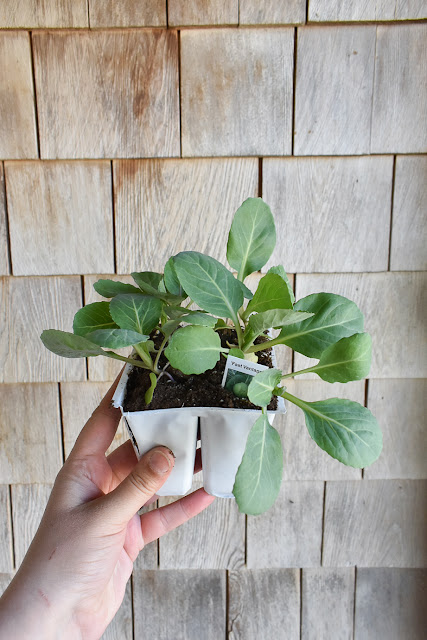 I tried to select things we enjoy, but I also wanted it to have a slightly formal feel to it, so some of the varieties are a little more ornamental. In the end, we have lots of kale, collard greens, cabbages and brussels sprouts as well as a few varieties of lettuce. I still have to find a few things, but it's mostly planted, including some of the seeds we grew and then hardened off (like our snap peas). 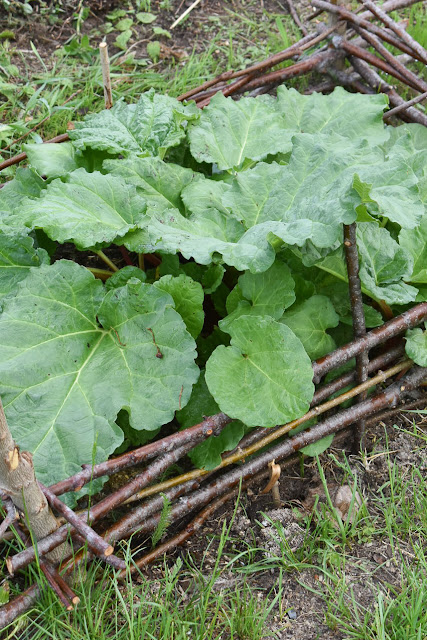 This little plot of rhubarb was under our demo pile and then seemed to be completely trampled while we were cleaning up. But after a few sprouting leavings seemed to be surviving, I sectioned it off to keep the kids from ruining it more. A month later and we have a nice little rhubarb patch! 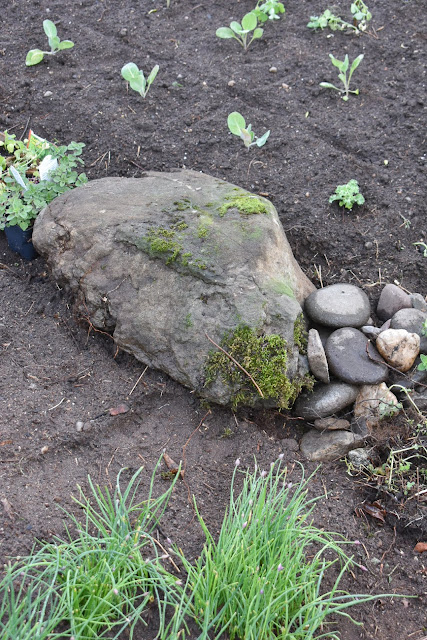 Ryan dug up two large rocks and placed them in the corners of the the smaller herb garden. 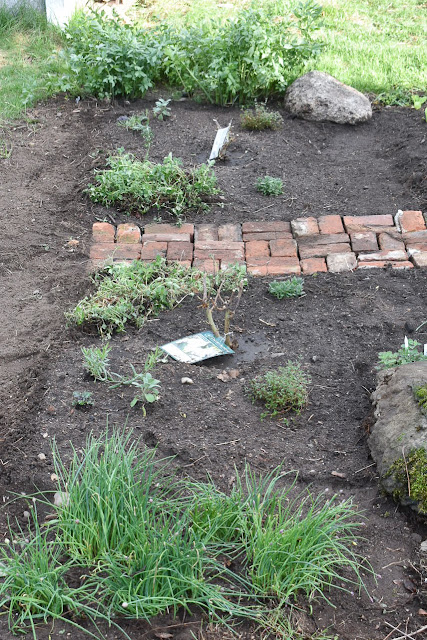 I made two symmetrical herb beds at the entrance from the drive. Each has a rose bush in the middle. From what I've read, herbs are good companions for roses, however we'll keep them at bay to give the roses space. I also transplanted a large amount of chives at one end by the roses, as apparently the chives increase the scent of the roses, ward off some pests and prevent some common diseases. 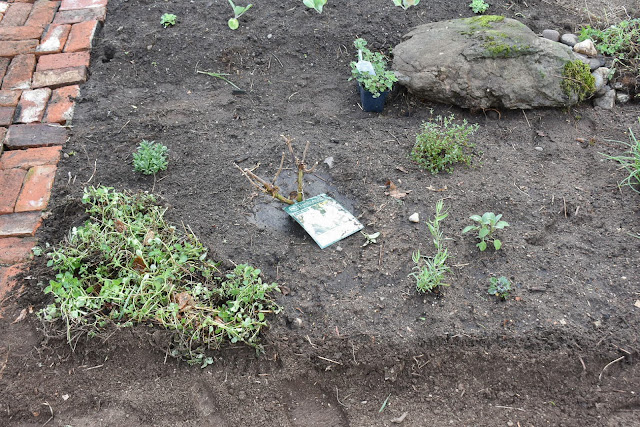 For one side I selected Jude the Obscure, and for the other, Desdemona. 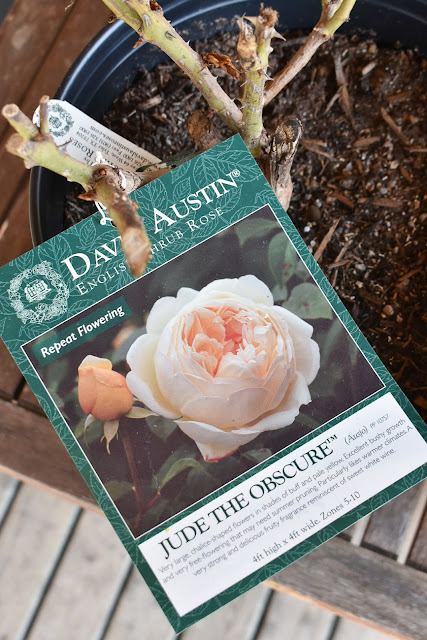 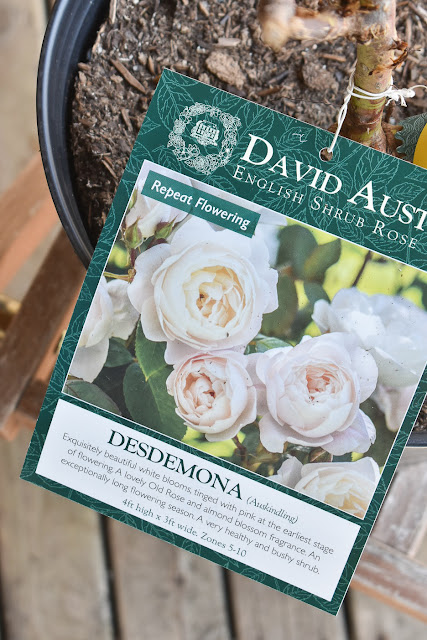 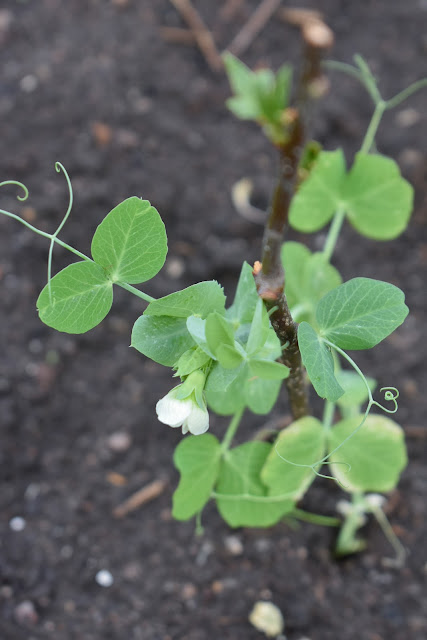 Our first bloom on our snap peas, which we started from seed weeks ago! 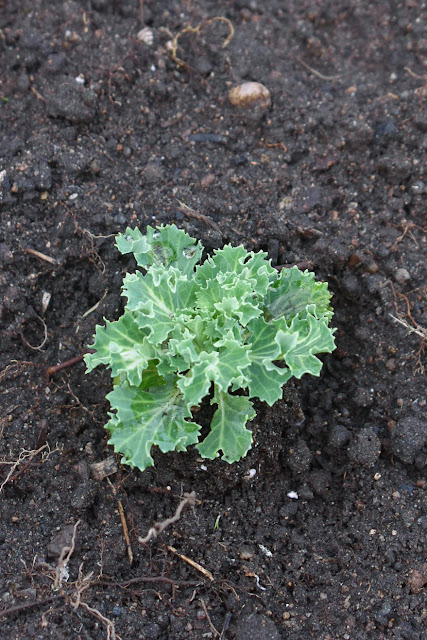 As mentioned, while I did plant mainly things we would eat, I couldn't resist a couple ornamental cabbages! 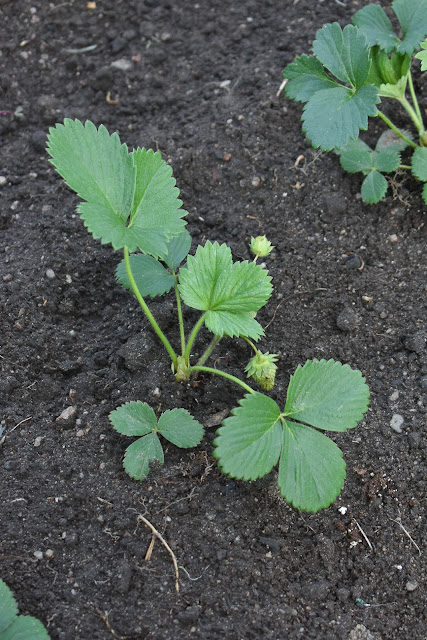 My strawberry plants also have started producing berries. We don't have many, but these are fun for the boys to watch. I just need to find some straw to put down and possibly some sort of cover so the smaller animals can't get at them. 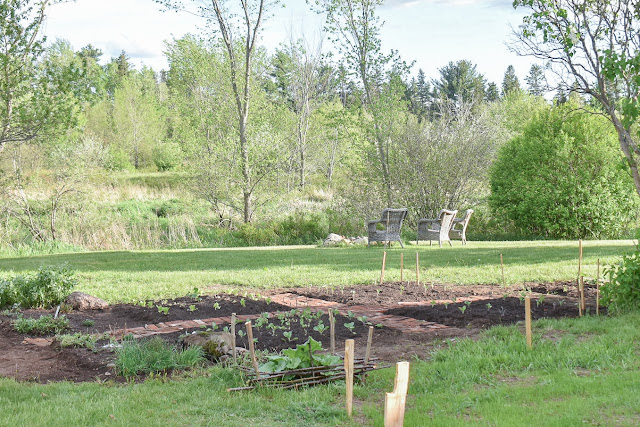 We still have to figure out the perimeter and some supports and things for some of the plants, but for a good days work, we got a lot accomplished. 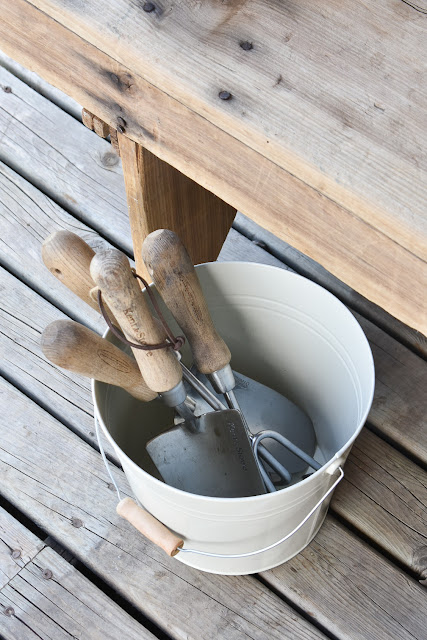 I can't wait to share more as it continues to grow.
Posted by the growers daughter at 7:58 PM