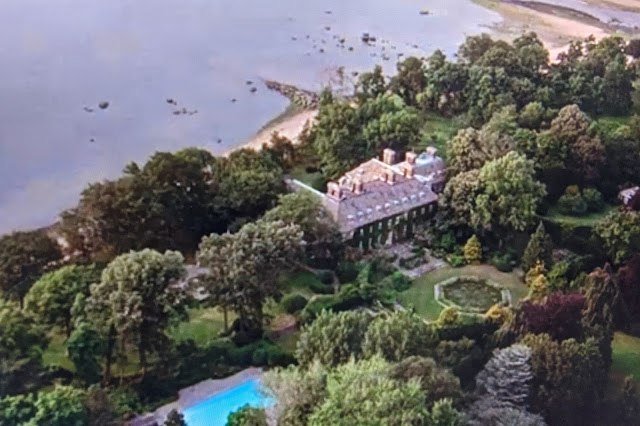 "Once upon a time, on the north shore of Long Island, not far from New York, there was a very, very large mansion, almost a castle, where there lived a family by the name of Larrabee. There were servants inside the mansion, and servants outside the mansion; boatmen to tend the boats, and six crews of gardeners: two for the solarium, the rest for the grounds, and a tree surgeon on retainer. There were specialists for the indoor tennis courts, and the outdoor tennis courts, the outdoor swimming pool, and the indoor swimming pool. And over the garage there lived a chauffeur by the name of Fairchild, imported from England years ago, together with a Rolls Royce; and a daughter, named Sabrina." (Opening credits, Sabrina, 1995)
Last weekend, I stumbled across the 1995 remake of one of Audrey Hepburn's classics, Sabrina (1954). If you haven't seen it, I'll give a quick synopsis. The daughter of the chauffer to a wealthy Long Island family is infatuated with the family's youngest playboy son. In an attempt to get over him, she takes a job at Vogue in Paris, and while miserable at first, ends up finding herself. She returns home, more grown up and sure of herself, only to suddenly attract the notice of the younger son, who doesn't recognize her. The only problem is, the younger son is currently engaged. Not only that, but with the engagement comes a very large merger which will make the family's company a very large amount of money. Will all be for not? Enter the older son, sent in to do damage control. If he can whisk Sabrina away, all with be back on track. Or maybe he just might fall in love himself and ruin everything.
It's a classic love story. And it's well done. But the real reason I want to share it is because it's just the most beautiful movie to watch, set wise. We're always swooning over anything Nancy Meyers touches, and I thought, I have to share this one. I know you'll love it just as much as I did!
One thing that struck me when I was watching it was how, despite being a remake, they made it feel so much older. And that's why I think it's so amazing that, having now carefully re-watched through the scenes, with just a few minor tweaks, it could be something so currently in style. It's a movie for the grandmillenial if there ever was one. and I think you'll wholeheartedly agree. 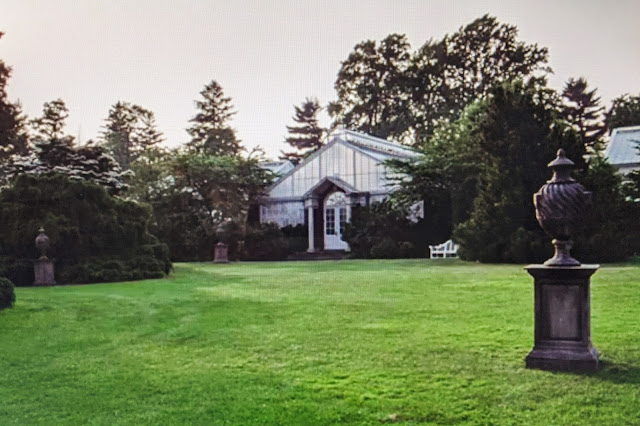 First, it's set on Long Island, in a grand old mansion. It's gorgeous. 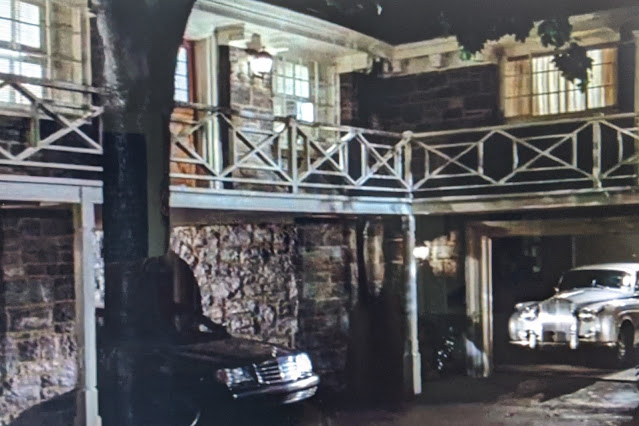 The chauffeur, and his daughter, live in the apartment above the garage. Having chosen to become a chauffeur to allow himself more time to read, his apartment is completely quaint. Stacks of books litter every surface and the green sofa and tartan drapes add just a touch of masculinity. 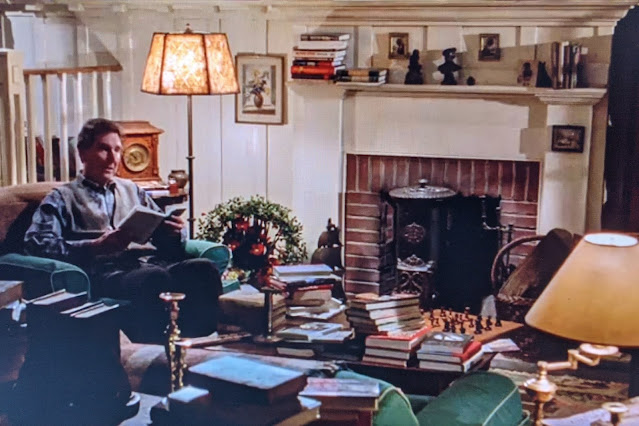 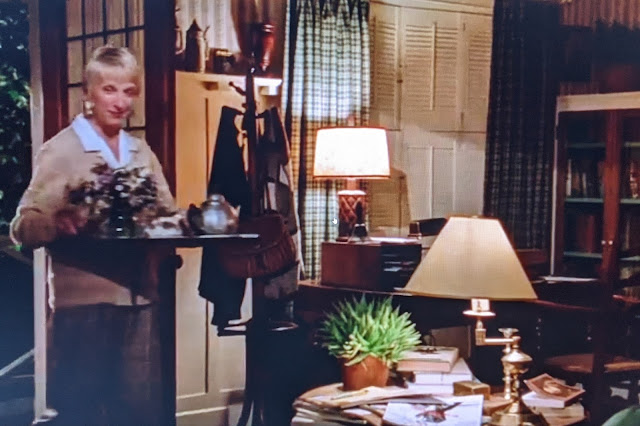 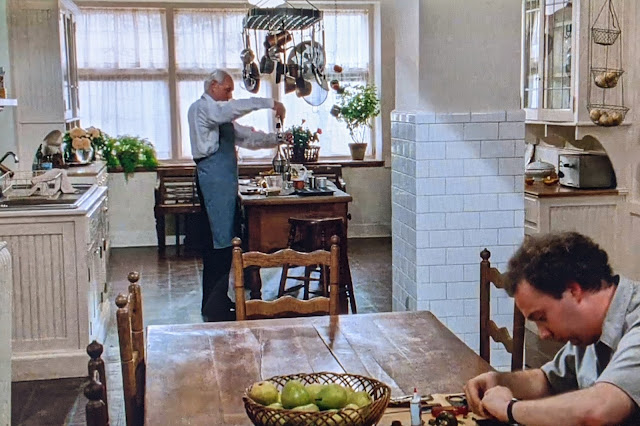 There's a sort of upstairs downstairs aspect to the story as well, as it follows both the wealthy Larrabee family, and includes glimpses into the lives of their servants. This allows for a few scenes in the kitchen which is just beyond. I just love the old pine table (these scenes remind me of Downton Abbey!) as well as the antique work bench. The cabinets with the lead windows and the bracket details are timeless. And I just love the stone tops with the large wooden boards for working on. Not shown is a huge antique stove that appears for about three seconds, but I sat and stared at for a few minutes because that whole little scene is just so perfect. 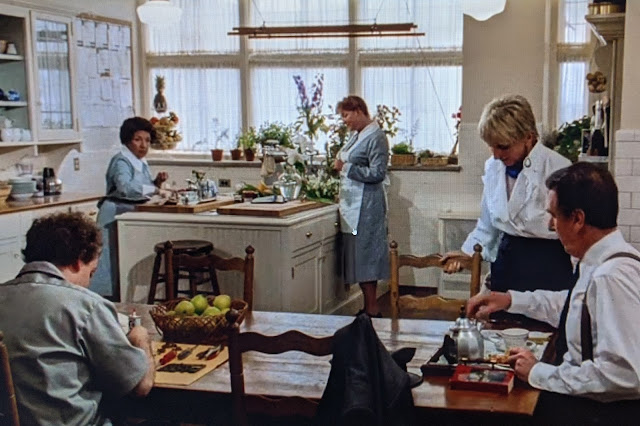 Then there are the few hallway scenes in which we get a glimpse into the mansion, and I think you'll agree, with a few tweaks it's easily something you'd find in the pages of Veranda. The large tapestry and the hints of blue and white... 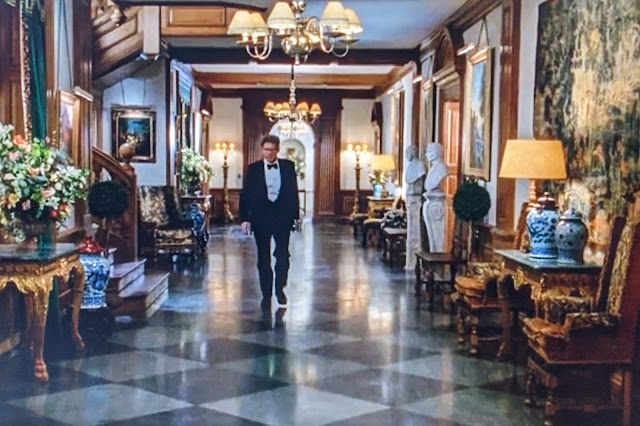 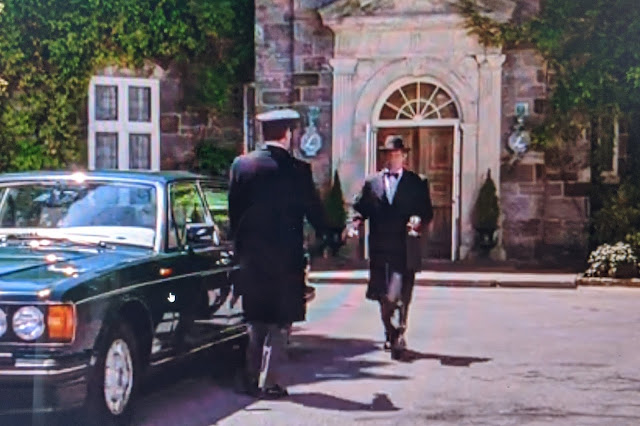 I love that the vintage Jag is green. 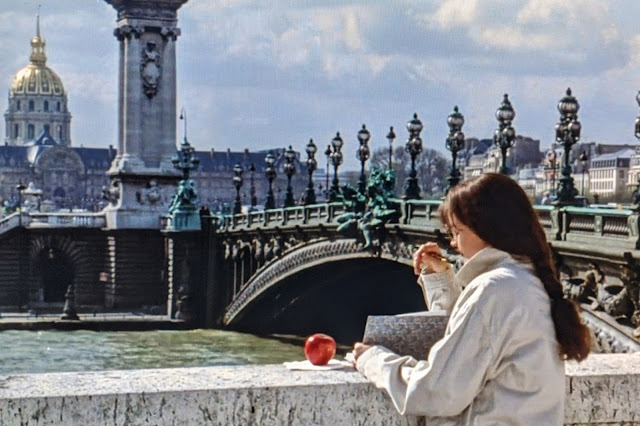 Then, as if the views of Long Island aren't enough, she leaves for Paris, and we follow her around as she finds herself. There are a few classic cafe scenes, and a few other glimpses of the beautiful city. 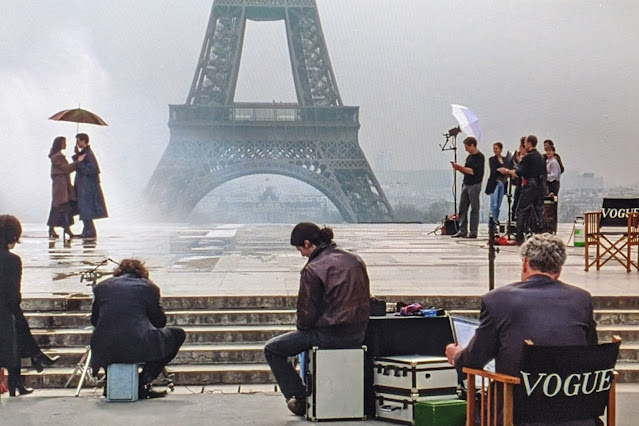 The fact that she's working as an assistant at Vogue just makes it all the more perfect. 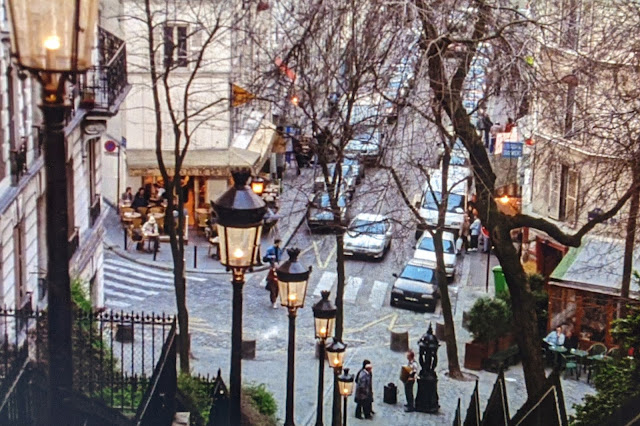 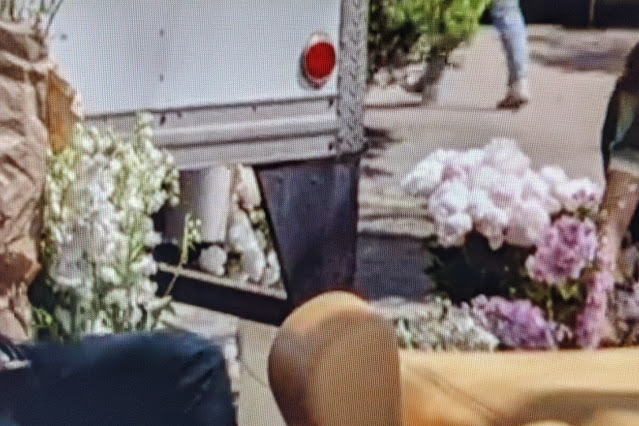 Then there are the party scenes. The Larrabees are known for the parties. While the party scenes are dreamy, even the glimpses of the preparations are satisfying to watch (like the quick peak at the pails of peonies and roses and vibernum - or the birthday gift Linus pulls out tied with green velvet ribbon!) 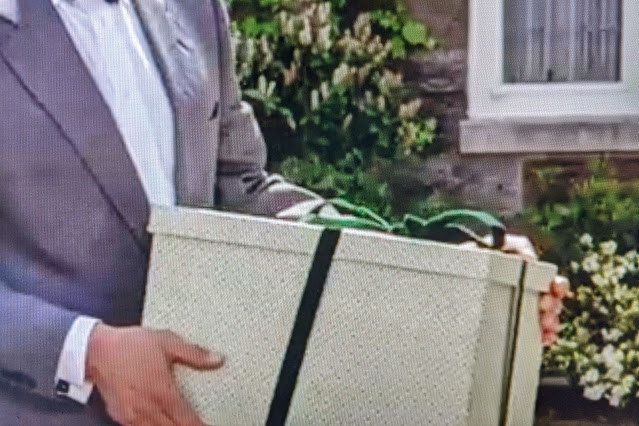 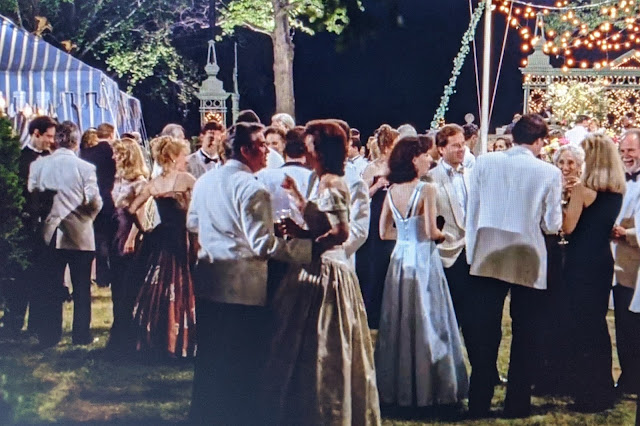 The parties are lovely - the blue and white striped tents, the twinkle lights, the champagne, the white tuxes and ball gowns, the orchestra, all on the estate. 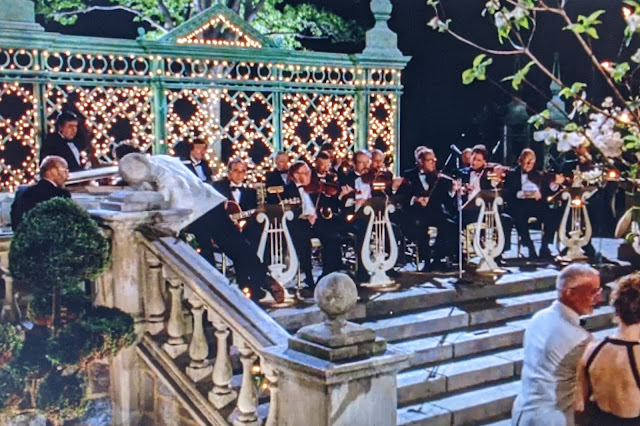 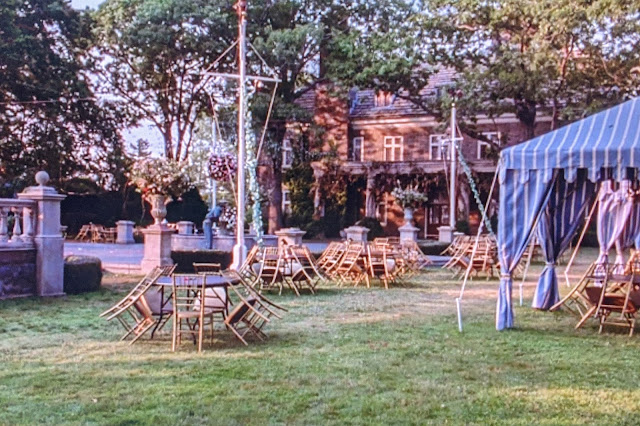 The morning after is even gorgeous! 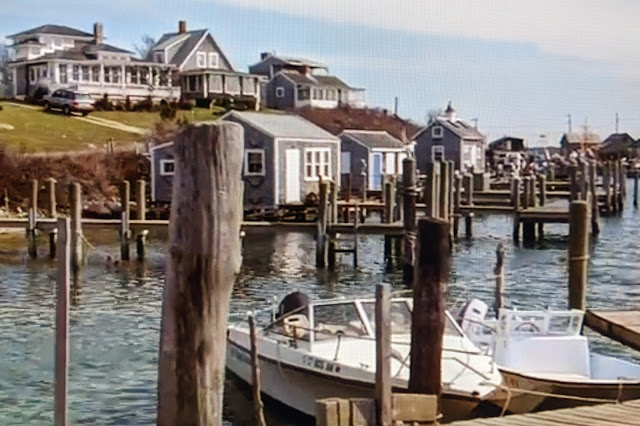 So we have long island, and scenes in Paris, and then a quick jaunt to Martha's Vineyard by private plane to view the family's cottage. 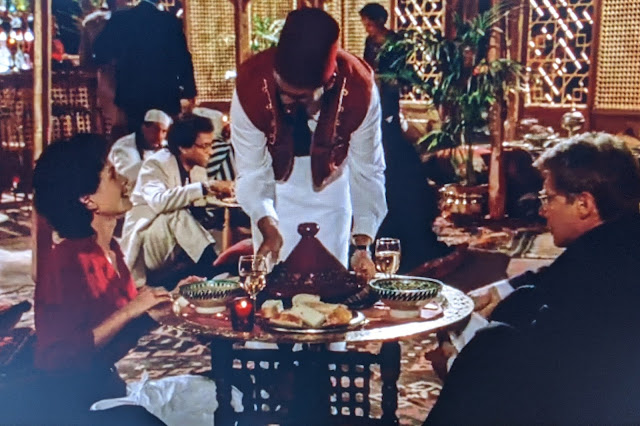 There are two "dates" that Sabrina and Linus share that are also perfect. The first, a clambake on the beach by candlelight while on Martha's Vineyard, and the second, an intimate Moroccan dinner on the floor. They spend the evening getting to know each other, eating with their hands and falling in love. 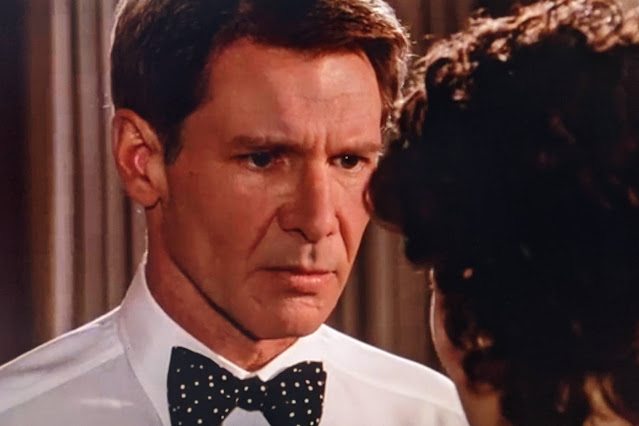 And while the age difference is maybe not quite as apparent in this remake, it's definitely there. Sabrina has just sort of discovered herself as a woman, likely in her early twenties, whereas Linus is the very successful, greying businessman. But then he takes his glasses off, and he's always wearing a bowtie, and you just kind of forget. 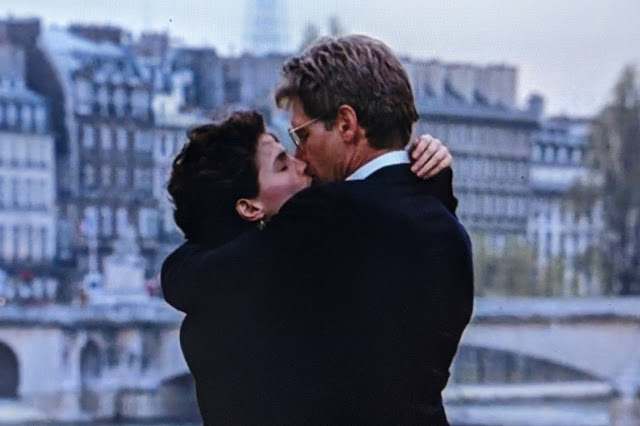 If you love watching movies that are just as wonderful to watch for the sets as they are for their storyline, I definitely recommended this version of Sabrina. It may not be as good as the original, but in my opinion, the sets alone make it a new favourite.
(All photos are from the movie, Sabrina which is currently available on Amazon Prime.)
Posted by the growers daughter at 10:09 PM