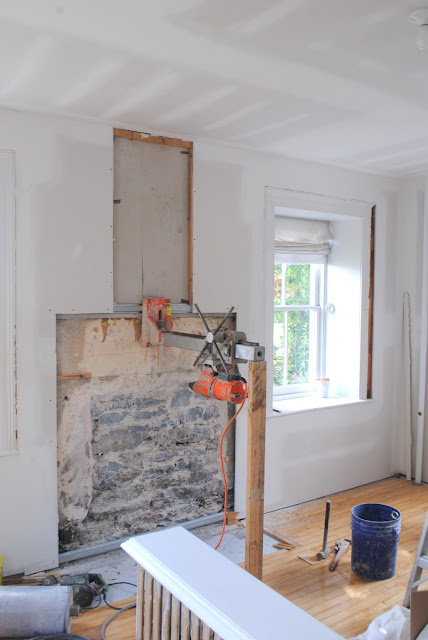 I can't quite find the words to express how thrilled I am to write this post. But, before I do, there are a few things to note.

First, this will be a very general over-view of a huge amount of work, and weeks and weeks worth of waiting.

Second, while we are finished with the renovations, short of a few minor last minute touch-ups, the room isn't finished. The best part still remains - decorating it. However, up to this point, it's been at least partially furnished so we can finally enjoy it. We've only waited almost four months!

You can catch up on the renovations prior to this point, here.

And so we continue where we left off... 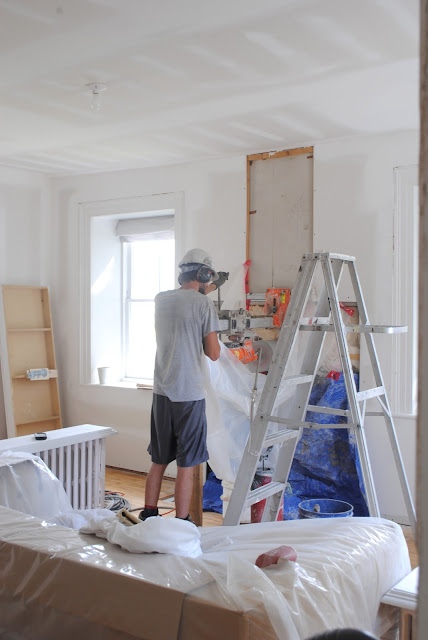 We hit a major stall in the middle of the summer with our fireplace installation. We had to vent a gas fireplace insert through a nine inch hole in a two foot limestone wall. Everyone was hesitant to begin chiseling through. The installers were concerned that what started out as a small hole, would end up a large hole on the outside due to interlocking stones of all sizes.

To our relief, coring a hole through the stone wall of our old home wouldn't be an issue. Though it would require some time and patience.

A massive drill was mounted to the wall, and the coring began. It was very slow and steady work, but the result was a perfect. 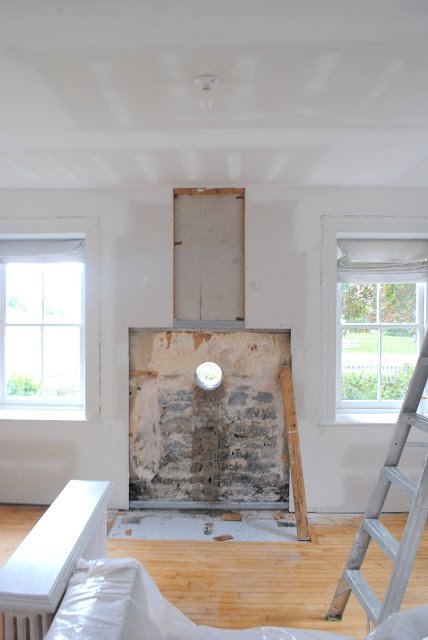 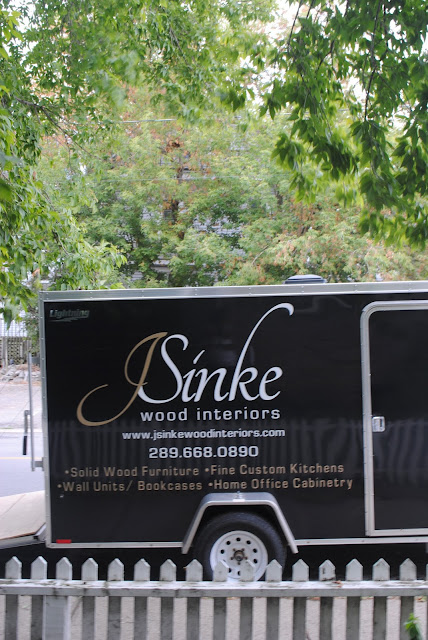 The next step in the fireplace was to install a base. Ryan's cousin, Johnny Sinke, is a local custom carpenter. He is in his early twenties and extremely skilled at his craft. Winning second place at the world skills competitions in fine woodworking insured the success of his own business, so we were very thankful he made the time to design and install a mantel for us. 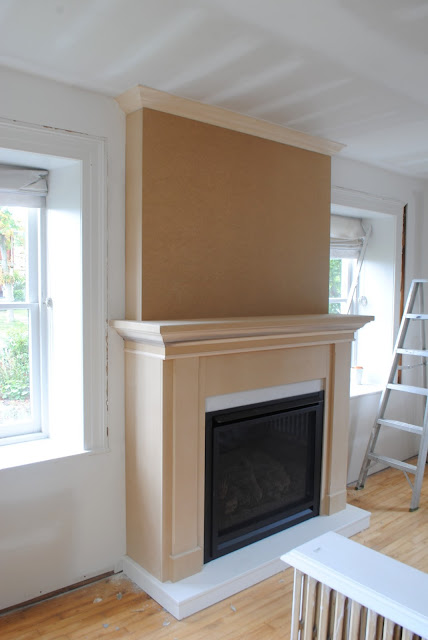 We wanted something that could hold it's own in such a large, open room, but we also wanted something simple and clean. I wanted a large mantel shelf for display, and big mouldings to suit the large window casings and 8 1/2" baseboards.

His design was perfect.

After the base was installed, the insert came next. He then returned to put the mantel around the insert, and to install the bulkhead and finish everything off. 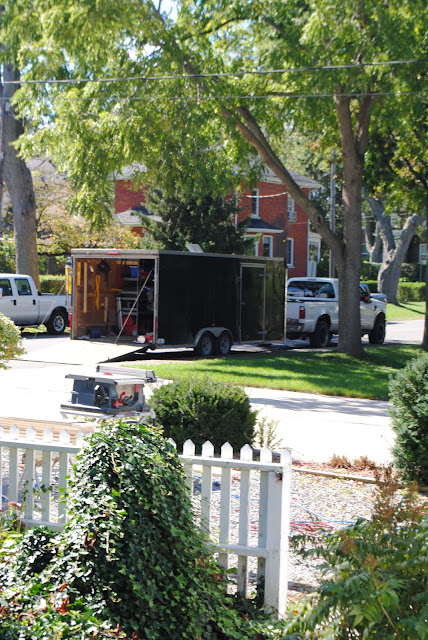 Next came the rest of the carpentry which was done by a friend of ours. 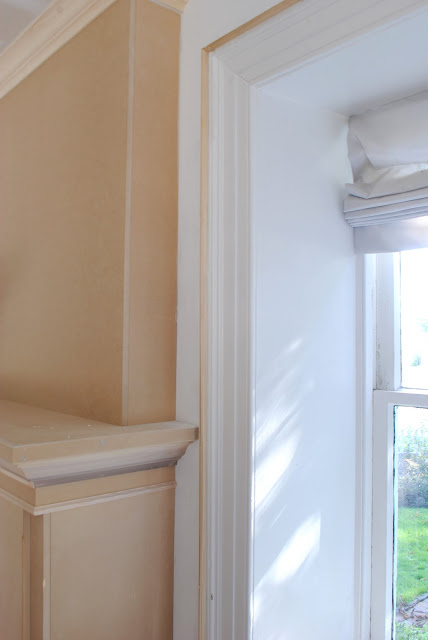 When the drywall was installed, we lost most of the definition on our window casings. Every piece of trim and wall in this room is different. Nothing is even and everything requires extra time and care to make it level to the eye. And nothing is made the way it was back then.

Rich and his crew did an amazing job. 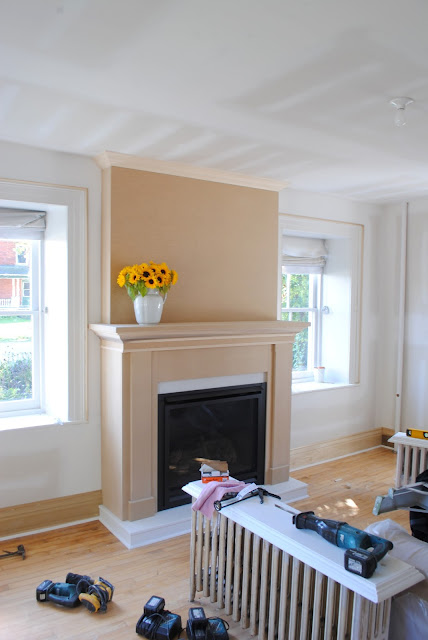 We chose 8 1/2" hardwood baseboards and put an extra piece around our windows to add that definition we wanted. 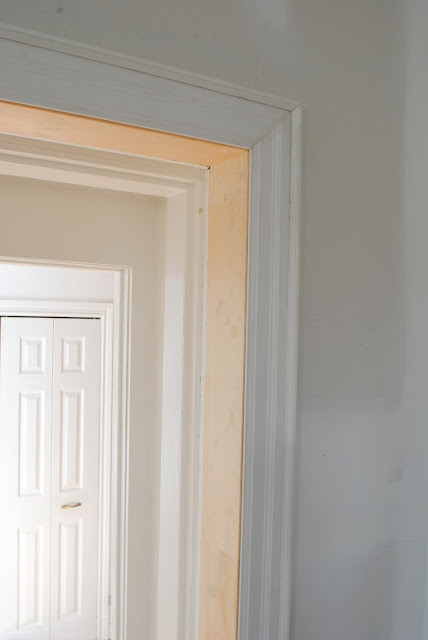 He also installed door casings that best matched the original trim around the windows. 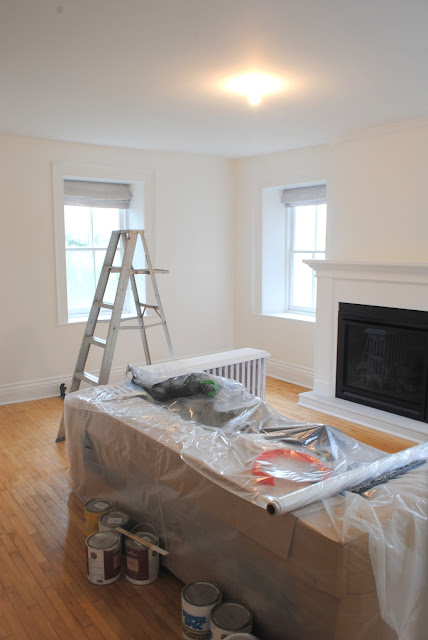 You can then imagine our excitement at this point when our painter, who is booked for weeks, had last Saturday open due to the coming rain and an exterior job lined up. We ran around getting everything prepped for her as she only had one day.

Now usually, when it comes to painting a room, I paint it myself. However, because everything in the room was new, I wanted a professional to paint it. And I'm so glad I did. She knocked the entire room off in one day. 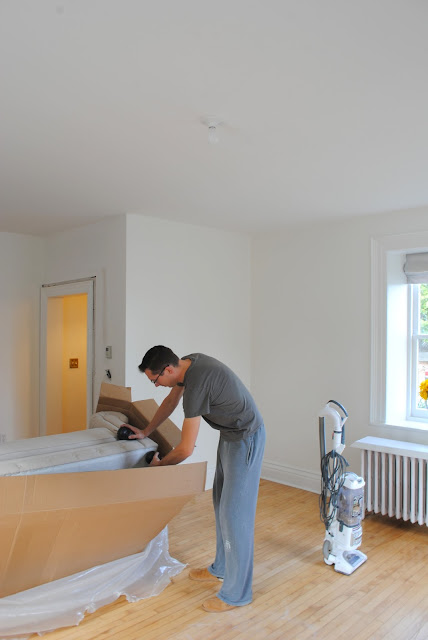 Yesterday afternoon was like Christmas morning as Ryan unpacked our couch which has been sitting in a box for months!

You can see in the back ground, the other door casing still needs to be taped and mudded as we had opted to remove the original, and match the doorway opposite to this one. The originally had been cut off when the stairs were moved and it would have required so much time to strip and fix. Plus it was quite expensive to try to custom make another matching casing for the other doorway.

The drywaller will come in the next week, but we didn't let that stop us from having the painter in. 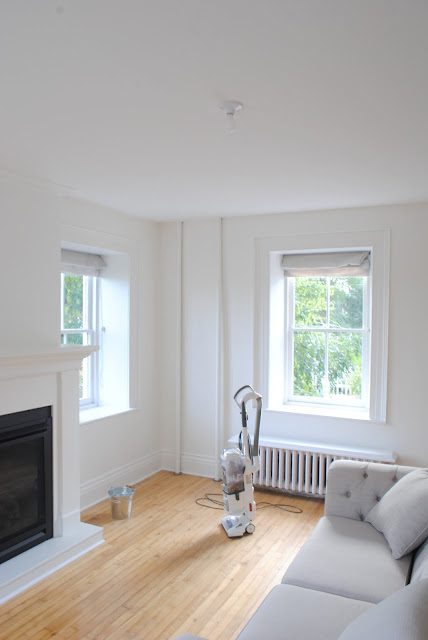 The room was then scrubbed from top to bottom. 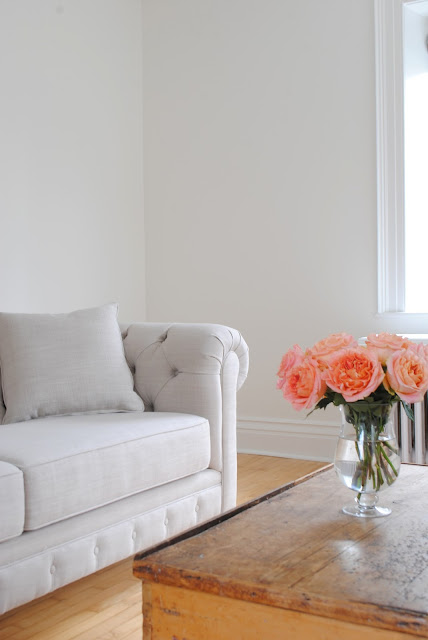 We then began furnishing it just enough to be able to sit comfortably in it. The rest of the furnishings will come soon, but for now, we were more than happy to just simply sit and enjoy the best part of our new home for the first time. 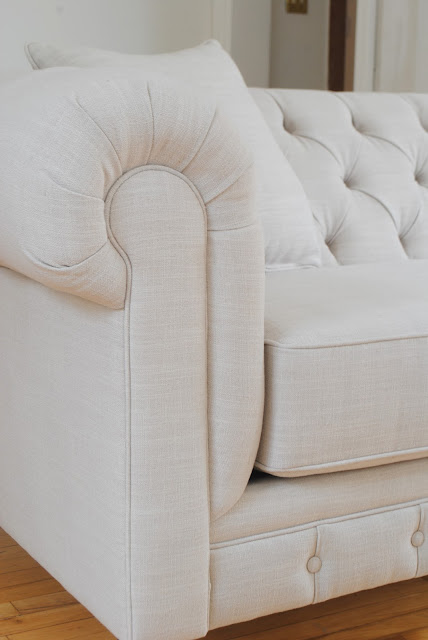 Our sofa is a classic chesterfield with it's rolled arms and tufted back. It's done in a nubby linen with turned legs. We purchased it at Leons of all places, and won a 20% discount, which in the end, covered the taxes and delivery and even a 5 year scotch guard stain warranty. This was a huge deciding factor for me. We have two little boys and accidents are inevitable, but it's so nice to have that peace of mind. 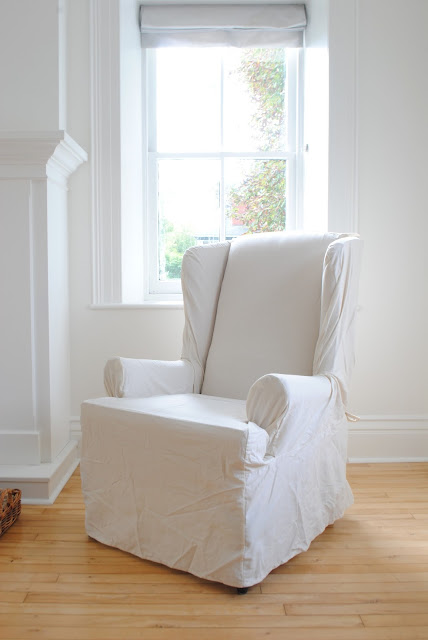 I also spent a great deal of time researching chairs. I wanted two classic wing chairs and really couldn't find anything that I loved new. I wanted something that was upright for reading so the classic wing chair seemed most suitable. But finding one in a fabric I liked was so hard. I decided to look for a pair of used chairs to have recovered. I was thrilled to find this pair locally for $140. They are in great condition, however they are dusty rose! Next came the dilemma of covers. I wanted slip covers if I could, but again, really struggled to find what I was looking for. I'm not skilled enough to sew my own, so until I either learn, or find someone who can for a reasonable price, these $50 covers from SureFit were my next best option. They tuck way into the upholstery and tie at the back. I still have to steam them, but you get the idea. They are made from a duck cloth material. I'm toying with the idea of hemming them so you can see the wooden legs. 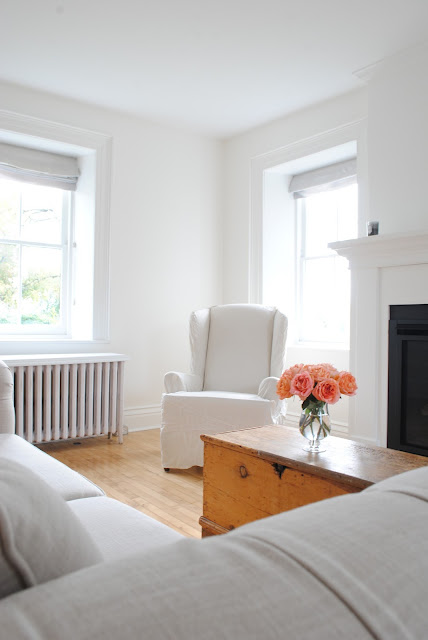 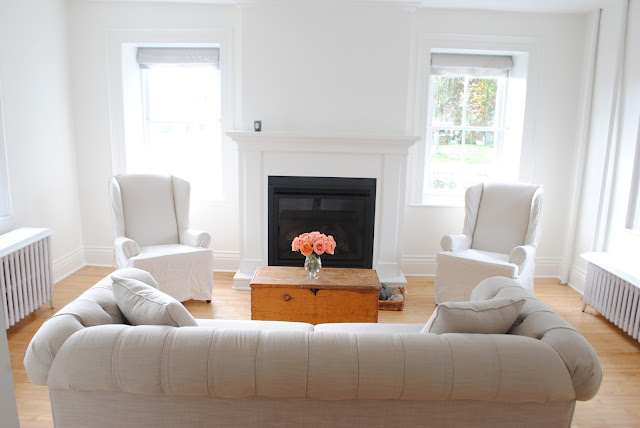 I can't wait to see it with the rest of the furnishings. I have most of the pieces in storage that I have been saving, but there are still a few that I need to find. One of which is an area rug.

Overall though, the room will remain quite simple. 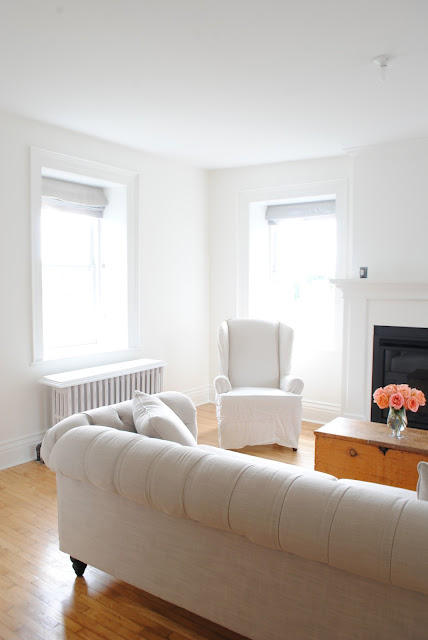 The four windows and white walls make for the most beautiful lighting. 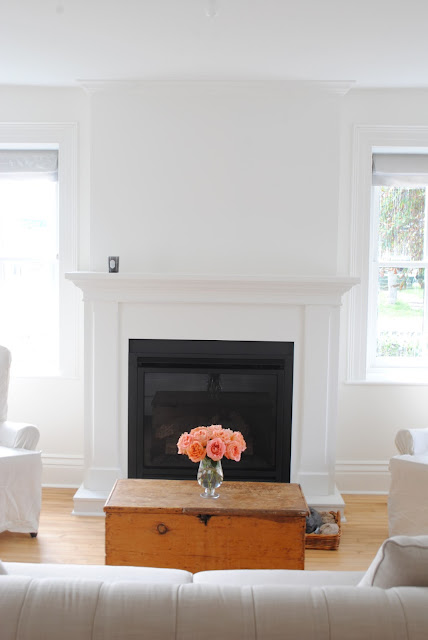 And we can't get enough of the fireplace - and neither can Oliver, our miniature Schnauzer, who has made his home right in front of the hearth. 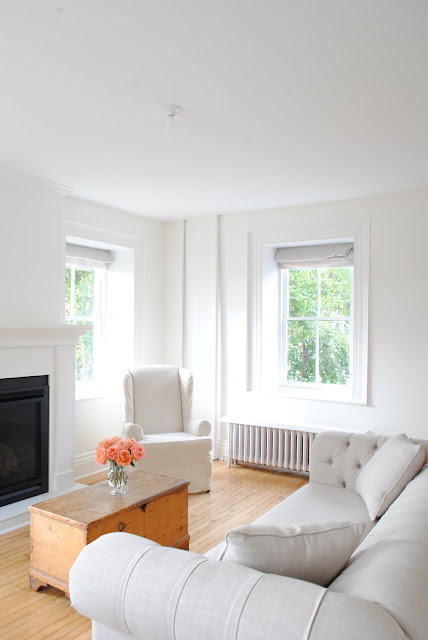 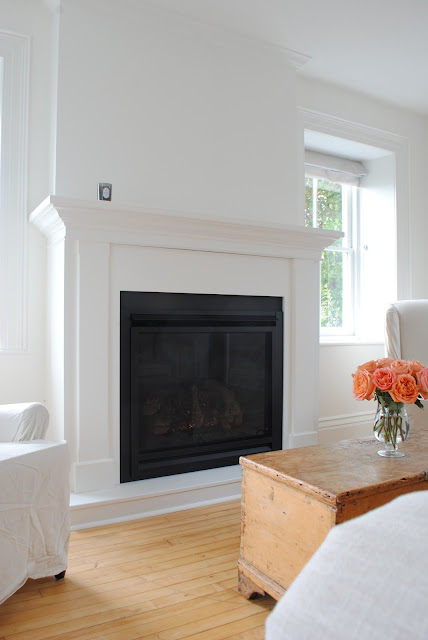 We've spent the first four months without this space. We got used to the house without it, so now, all of the sudden we have this huge beautiful addition!

It's like falling in love with our home all over again.

Posted by the growers daughter at 2:51 PM